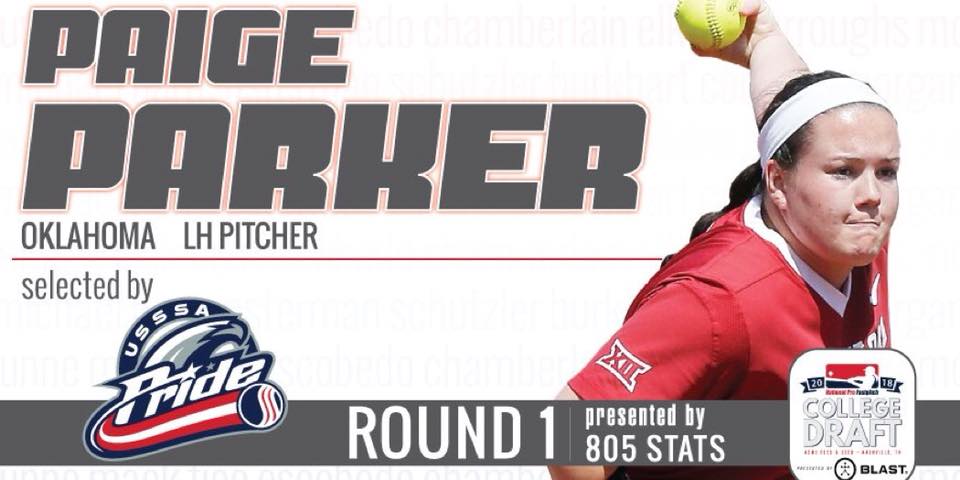 “The 2018 NPF draft, I feel, was probably one of our most successful drafts to date, “ remarked General Manager Don DeDonatis. “We added pitching, hitting, defense and speed filling some of our most immediate needs and yet, not disrupting but complimenting the teams chemistry. The Pride family grew with players who each have a history of winning championships and we look forward to adding an NPF Championship to their list.”

With the sixth overall pick, the Pride selected Paige Parker as their first round pick. The lefty pitcher is a proven champion having won back-to-back National Championships with the University of Oklahoma. Parker’s accolades include being named a three-time All American, three-time Big 12 Pitcher of the Year, and the 2016 WCWS Most Outstanding Player. She entered her senior year ranked third all-time at Oklahoma in strikeouts and fourth in wins. The Independence, MO native currently boasts a 21-2 record in 2018 with 147 strikeouts and a 0.85 ERA.

The Pride selected first in the second round and took Jessie Warren from Florida State with the seventh overall pick. The two-time All American had a monstrous junior year in 2017 where she was named the ACC Player of the Year and was a Top 10 Finalist for Player of the Year. In 2018, Warren is hitting .370 with 12 homeruns and 44 RBIs. The Tampa, Florida native is already Florida State’s career homerun leader and her 74 NCAA career homeruns are the most ever by a Florida player.

Nicole Pendley, the younger sister of Pride shortstop Shelby Pendley, was selected in the second round, 12th overall. Pendley has been a key offensive and defensive piece in centerfield for the Oklahoma Sooner’s National Championship titles in 2017 and 2016. This season she is hitting .313 with 9 HR, 36 RBIs and an OBP of .444. The Pendley’s will become the first sister duo in Pride history.

The Pride selected infielder Nicole DeWitt 17th overall with their third round selection. DeWitt was a member of the Florida Gators National Championship team in 2015 where she earned All WCWS honors as a freshman. DeWitt is having a career year in 2018 already topping career highs with her .377 batting average, 10 homeruns, and 43 RBIs.

With their final selection, the Pride drafted speedster Cortni Emanuel with the 23rd selection. The Georgia outfielder and two-time All American is one of the most decorated players in Georgia history. Her 23 game hit streak in 2017 is a Georgia record as is her 167 career stolen bases. This season Emanuel is hitting .433 with a SEC-leading 71 hits, 54 runs scored and 42 stolen bases, which leads the SEC for the third time in her career.

The USSSA Pride kickoff the 2018 NPF season on May 30th at home against the Aussie Spirit. Currently, the Pride are on the road in Europe playing in the USSSA European Pro Softball Series hosted by the WBSC. Their games are being live streamed throughout the tour on USSSALive.com. Follow the Pride all season long on www.usssapride.com and on Facebook, Instagram, and Twitter.

USSSA is headquartered in Viera, Florida. USSSA is the world’s largest multi-sport athletic organization. Founded in 1968, USSSA has grown to over 4 million participants, competing in 14 nationally sanctioned sports including Baseball, Fastpitch, Slow Pitch, Karate, Basketball, Soccer and more! USSSA is an Associate Member of the WBSC. For more information about USSSA, visit www.usssa.com and follow USSSA on Facebook, Instagram, and Twitter.