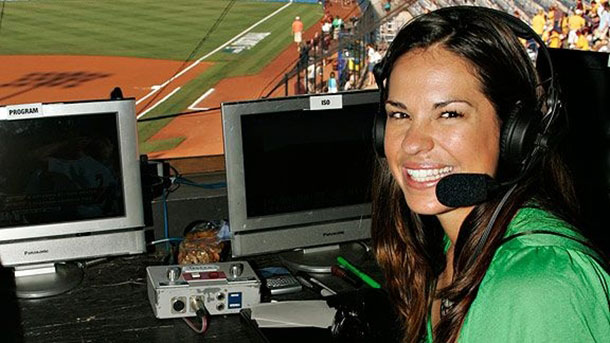 {USSSA Pride’s Jessica Mendoza sits down and tells the story of where exactly her baseball/fastpitch roots began, how influencial her family was in her success, and her alternate career now as a sideline reporter for the SEC and her first opportunity to cover a major league game for ESPN}

My dad was a baseball coach, so it wasn’t a surprise that we spent much of our “bonding” time in the dugouts of the baseball field or watching Dodgers games. My first sport was baseball — I was the only girl on the team. Baseball was as much a part of my life as playing tag or climbing trees was for other kids.

So, even though I’ve spent the last 23 years (and counting) playing softball, there is no doubt where my true roots began. As a kid I would spend hours picturing myself playing in a MLB uniform, in all the big parks around the country.

It was not until recently, when I got my first opportunity to cover a major league game as a reporter for ESPN, that my dreams of being a pro baseball player came flooding back. I was so nervous to cover my very first game — Boston Red Sox vs. Texas Rangers, no less. Would I feel comfortable? Out of place? How much do I really know about the game? Could I relate to these guys?

The moment I knew I belonged — and that the sports were more like twin siblings than wicked step kids — was when I met Red Sox manager Terry Francona. He has two daughters who played softball at UNC, and he follows the sport and knew about me and some of my Olympic teammates.

When we were in-game and I was in my reporter spot next to the dugout, looking and listening for information I could share on air, Terry Francona was peeking through the side of the dugout looking for me! He was curious about my approach as a hitter, the types of pitchers I preferred facing and what I felt my biggest assets as a player were. After going back and forth with questions, I realized there was very little difference between the way I play the game and the way most of the guys on the field play. I felt like I was at home. In the dugout with the coach, talking the game, taking in what I love about baseball … and softball. It’s all the same.

Last week I covered my second game, the Rangers in Oakland. I felt even more at home as I stood with ESPN analyst and ex-player Nomar Garciaparra during pregame batting practice and discussed the swings of hitters five feet away.

What was the main point of discussion? “Moneyball,” of course! Brad Pitt was there in Oakland and the movie premiered last week, so it was certainly a hot topic. Nomar and I agreed we were never Moneyball hitters (we don’t like to take pitches or walk often, and one of the main points of emphasis in Moneyball is on-base percentage). I am pretty sure A’s general manager Billy Beane (the character Pitt plays in movie) would not have liked my style of hitting: free swinging, bad-ball hitting. Which makes sense, too — as a kid I always imagined myself in a Dodger-blue uniform!

I now know one thing — besides hitting tips and Moneyball styles — I have learned working MLB games this year: My role as a reporter in the dugouts of MLB games is so much more similar to my role as a professional softball player than I ever would have thought.

I’m sure it won’t be long before the Terry Franconas of the game ask me to put down my notepad and grab a bat.