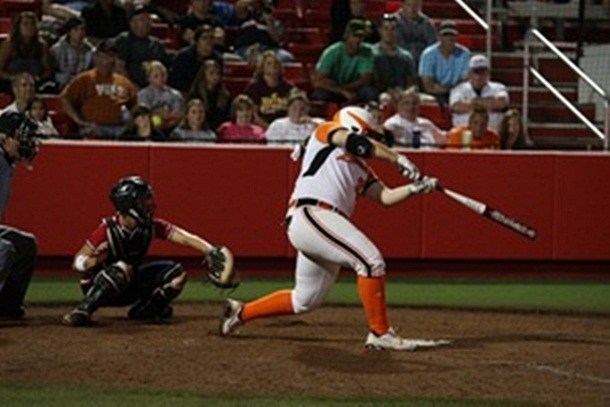 With May-Johnson back in the dugout, Goler did her best impression of her new teammate, hitting a walk-off home run to give the Bandits a 6-5 victory. The blast capped off a 5-2 rally in the seventh inning.

In her first game out of retirement, it didn’t take May-Johnson very long to acquaint herself with Rosemont Stadium.

With the Bandits down 4-0 in the bottom of the sixth, May-Johnson launched a two-run home run over the left field wall, cutting the lead in half, and making her presence felt in the lineup.

She finished 1-for-3 on the night.

Pride pitcher Danielle Lawrie was tough all night on the Chicago bats, holding the Bandits to just two runs through the first six innings. In the seventh, the Bandits came alive.

Caitlin Lever singled and crossed home after an Amber Patton triple into the left-center gap. Two errors by Andrea Duran at third allowed Patton to score and cut the lead to 5-4, putting Megan Wiggins on first base with just one out.

After Danielle Zymkowitz popped out, Goler launched her NPF-leading 11th home run of the season, putting her two behind May-Johnson’s 2008 record of 13.

Prior to the excitement, USSSA took the early lead in the top of the first after a two-out double by Jessica Mendoza. Charlotte Morgan drove Mendoza in to grab the 1-0 lead.

Chicago would have its chance in the first as well but would fail to score with runners on second and third. Danielle Zymkowitz reached base with a one-out single and Alisa Goler moved her to third with a double.

In her first at-bat of the season, May-Johnson went down on strikes and Tammy Williams followed with a hard fly out to right field to end the threat.

Alisa Goler hits a walk-off home run in the seventh inning (photo by Dina Kwit).
Lawrie and Donna Bourgeois would pick up the pitcher’s duel until the sixth inning, when the Pride offense struck again. Morgan started the charge again, reaching base via a Williams error at shortstop.

Francesca Enea roped a double to right-center, moving pinch runner Kelsey Bruder to third. The next batter, Ashley Charters, cleared the bases with a triple, giving the Pride a 3-0 lead. Charters would be driven in two batters later by a Caitlin Lowe RBI single to go up 4-0.

Bourgeois saw her night end in the top of the sixth with two outs, the bags packed full of Pride runners, and Mendoza at the plate. Jamee Juarez took the circle in relief and promptly struck Mendoza out.

The Pride added one more run in the top of the seventh to pad their lead at 5-2 but Lawrie could not hold on in an attempt to grab win No. 10 on the season.