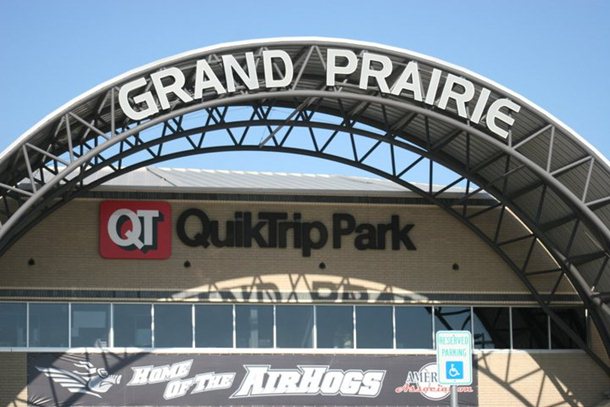 Kissimmee, FL- To end the Prides season, they ended their home stand in Grand Prairie, TX. It was a great experience for the team and the league as a whole as it ventured into new territory, showcasing to the West, the best softball in the world. Shortly after the series ended, USSSA was extremely humbled to recieve a letter from the city of Grand Prairie, thanking USSSA and the NPF, their whole letter relaying one big message: WOW!

I just had to take some time to share my thoughts on the NPF games that we hosted at QuikTrip Park in Grand Prairie on August 5-6, 2011. In one word: WOW!

The two teams, the NPF Diamonds and USSSA Pride flew into the Dallas/Fort Worth area from Calgary, Canada. They arrived during an all-time record breaking heat wave! Despite those conditions, which reached 110 degrees, the Ladies proved to us that the NPF is “a whole new ballgame”!

Not only are they incredible athletes, which we all knew, but they were so gracious to the fans. Starting batting practice in the middle of the day in record heat, then pre-game, then the game, and then EACH and EVERY player stayed around till almost 11pm signing autographs for every fan!

Every professional sport should pay attention to the NPF and their game day experience, which includes incredible on-the-field action, but also: there is dancing, interacting with their teammates, home run hitting contests, and showing love to the fans.

When Ron Neely came to us with the idea of bringing NPF and the USSSA Pride to QuikTrip Park I was interested. However, as you can tell, I was blown away by the experience. In my 40 years of watching professional sports, it ranks as one of the most enjoyable experiences EVER.

I really had hoped we could get girls and their families to attend the games. It would prove to girls that opportunities were available to them if they practice and work hard in Softball! However, I owe everyone an apology. That was a narrow thought! EVERY GIRL and EVERY boy, every Coach, and administrators in all sports need to watch these teams in action….because there is plenty to learn by EVERYONE!

As the announcer, on Saturday, I happened to watch the players during the Star Spangled Banner. It brought a tear to my eye. Each girl, on both teams, stood exactly the same at full-attention. To many, that may seem like a small thing, but as I said EVERYONE can learn from the NPF.

On the defensive calls, each and every time found the player moving to the right position, but as I said EVERYONE can learn from the NPF.

Highly super competitive but with an incredible display of sportsmanship, but as I said EVERYONE can learn from the player of the NPF.

Availability to the fans was incredible. Before and after the game, each player made sure that every fans autograph request was met with a “thanks and with a smile”, but as I said EVERYONE can learn from the players of the NPF.

I want thank Ron Neely, our USSSA Hall of Famer for bringing this request to host the games, to USSSA for working with us on the extreme heat, for the players and coaches of the NPF, and to the league administrators. You have an incredible product…and we all LEARNED from your two days at QuikTrip Park in Grand Prairie.

Morgan Melloh, the Diamond pitcher, was hit in the face from a line-drive in one of the scariest moments we have experienced. She was taken to the hospital. The very next day she was at the park at the Club Level. We heard the good prognosis and we told her how glad we were… Morgan smiled and said thanks for all the thoughts and prayers, it was really appreciated.

The NPF is “a whole new ballgame”. We all need to say, “That’s the way professional sports needs to be played.” Thanks for showing us all the way….