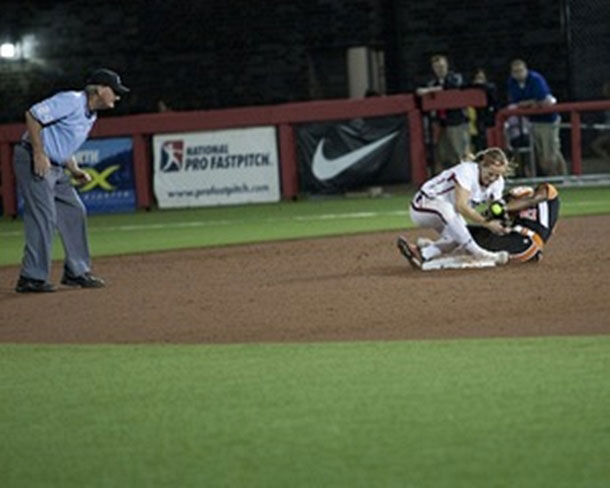 ROSEMONT, Ill. – The Pride sent Cat Osterman to the circle after last night’s loss from Alisa Goler’s walk-off home run in the bottom of the seventh.

With Nikki Nemitz in the circle for the Bandits, the Pride came out swinging from the first batter of the game. Natasha Watley’s lead-off single set the tone for the rest of the game. She would later come around to score after a single by Charlotte Morgan to give the Pride a 1-0 lead. The Pride would add one more run before the inning was over on a Francesca Enea double.

Osterman came out strong in the first three innings retiring the first eight batters she faced.  After hitting Kelly Kretschman to start the second inning, Nemitz settled down and retired the next three Pride hitters.

The Pride added to their lead in the third, after a walk to Jessica Mendoza. A double by Charlotte Morgan, allowed Mendoza to advance to third. With Enea up to bat, her high fly ball to Megan Wiggins in left field scored Mendoza giving the Pride a 3-0 lead.

The Bandits found some life in the bottom of the third after an Amber Patton single was followed by a Wiggins walk. With two runners on base, Danielle Zymkowitz came up to try and put the Bandits on the board but her ground out to Cat Osterman would end the inning.

Kelly Kretschman blasted her first home run of the year to start off the fourth inning giving the Pride a 4-0 lead. With the bases loaded for the Pride, a quick grab by Nemitz held the runners throwing Watley out at first. An error on a fly ball, allowed Duran to score ending the inning with the Pride 6-0. A Tammy Williams double in the fourth inning gave the Bandits some life but they were unable to capitalize.

The top of the fifth was a rough one for the Bandits with back-to-back solo home runs by Enea and Ashley Charters giving the Pride an 8-0. A pitching change brought Jamee Juarez into the circle. Juarez was able to retire the first three batters she faced in the game, ending the inning by striking out Andrea Duran.

The Pride scored their final run of the night off a  Mendoza sac fly that allowed Watley to come around and score giving them a 9-0 lead.

In the bottom of the sixth, the Bandits made things interesting after a Pride error saw Vicky Galindo safe at first. With Stacy May-Johnson hit by a pitch, Galindo advanced to second bringing Williams up to bat. A walk to Williams loaded the bases, with Jamee Juarez stepping up to the plate. A strike-out by Juarez ending the inning with no runs scored for the Bandits.

With neither team adding any runs to the board in the seventh the Pride took the second game of the series 9-0.