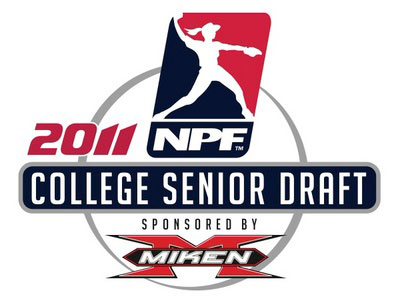 National Pro Fastpitch (NPF) and its four-affiliate teams will hold the 2011 NPF Senior Draft presented by Miken on March 18, 2011. The Draft will be streamed at 8pm EST from the Amway Center in Orlando, Florida. For the third consecutive year the NPF will broadcast the Draft on MLB.com.

“The NPF College Senior Draft is an event we all look forward to. It is a time for us to see who the NPF Owners and Coaches believe are the talents for the future of professional fastpitch softball. We are in a great place right now in building the League, and these draftees will certainly play a role in that process,” stated NPF Commissioner Cheri Kempf.

The 2010 Draftees made a significant impact during the NPF Season. Those players included 2010 Number one Draft pick Charlotte Morgan from the University of Alabama playing her rookie season with the USSSA Florida Pride. Morgan not only contributed to the eventual Cowles Cup Champions but also captured the NPF Battle of the Bats Title. Nikki Nemitz, a 2010 Chicago Bandits Draft Pick, was named NPF Rookie of the Year. Another strong Rookie of the Year candidate was the Diamonds, Loryn Johnson, who played various defensive positions and hit .291 with 8 home runs over the Season.

For the second consecutive year, Miken Sports is the presenting sponsor of the 2011 NPF College Senior Draft. “Miken is so proud to once again, be the title sponsor of the NPF College Senior Draft. We pride ourselves on being industry leaders at Miken, and we are proud to be a part of leading in the NPF’s stars of tomorrow for another season., ” said Justin Carrier, Promotions Manager of Miken Sports.

This will also be the second year the Draft is held in Orlando, FL but the first year it will take place in the Amway Center. “Each year we try to improve our Draft from an aesthetics point, building the event to be worthy of the importance it carries. Broadcasting from the Amway Center in Orlando, prior to the NBA’s Orlando Magic hosting the Denver Nuggets, is a privilege for the NPF League and the young women whose names will be announced.”

Each team has at least four selections in the five-round draft with Florida currently sitting with six picks total. Here is the tentative order of the Draft as trades may happen prior to the Draft :