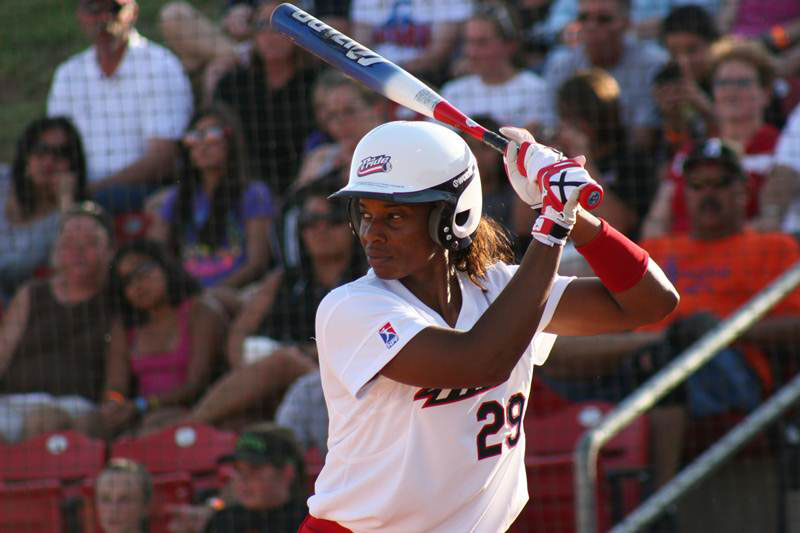 Even as a four time collegiate All-American, NCAA Division I National Champion, Olympic Gold and Silver medalist, and National Pro Fastpich Champion, Natasha Watley doesn’t take one day of her professional career for granted. While at UCLA Watley earned and holds the single season record for hits (112) and is currently ranked fourth in Pac-10 history, as well as seventh in the all-time NCAA record books. With the National Team she broke an Olympic record for stolen bases in 2004 and was third on the team with a .400 batting average.

She made her debut in the NPF with the New Jersey Juggernauts in 2005 before playing with the Philadelphia Force in 2006. In 2007 she pursued an international career and began playing in the Japan Softball league. She is currently a member of Team Toyota, there.
Last season (2010) marked her first year with the USSSA Pride. She led the team with a .402 batting average, .421 on-base percentage, and 14 stolen bases. Watley was also named the MVP of the National Championship Series, while hitting her first home run of the season in the final win of the championship series.
Get to know Natasha Watley a little better…
Q: What was the greatest attributes for the 2010 NPF Championship Team?
Natasha: We came together right at the right time. My motto has always been “it’s not how you start but how you finish”. If you would have seen our team 1 month prior you would have never thought we were a championship caliber team. We were able to stay positive and all make the right push at the right time!

Q: Tell us the experience of being an NPF Player.
Natasha: It’s been amazing to call my self a professional athlete! I love being able to have a playing platform post college that’s REALLY competitive.  My experience has been so amazing!

Q: What are you looking forward to for the 2011 Season?
Natasha: Getting back on the field with my teammates, growing the NPF, and making it more visible

Q: Who is the biggest influence in your life?
Natasha: My parents!!

Q: What are you doing to stay in shape for the 2011 Season?
Natasha: I workout everyday! Weight training, sprints, intervals. I’m looking for a good yoga place to try and do Bikram yogo!! I hear it’s a good workout

Q: You are considered to be a veteran of this League….what advice would you give to an NPF rookie?
Natasha: Just to enjoy the experience and try avoid going into the “real” world as long as possible:) People would kill to play the game they love for a living! Enjoy!!

Q: Describe the camaraderie in the NPF as it relates to having personal relationships with some rival opponents.
Natasha: Most of my closest friends are my competitors but we would all agree that when it’s game time it’s business but afterwards it’s great to hang out with your closest friends!

Q: Describe a typical game day during the NPF Season.  What do you do to prepare for a game?
Natasha: I usually sleep in because our games get done so late the night prior. I like to get at least one good meal in before game time preferably breakfast!

Q: With the recent decision of several athletes, including you, to be committed to one organization, the NPF, what does that mean for the sport in terms of growth?
Natasha: It means that we have decided to try and extend the professional life of a softball player even longer than usual! This is great for the sport so hopefully we all can help with getting NPF to be more visable!