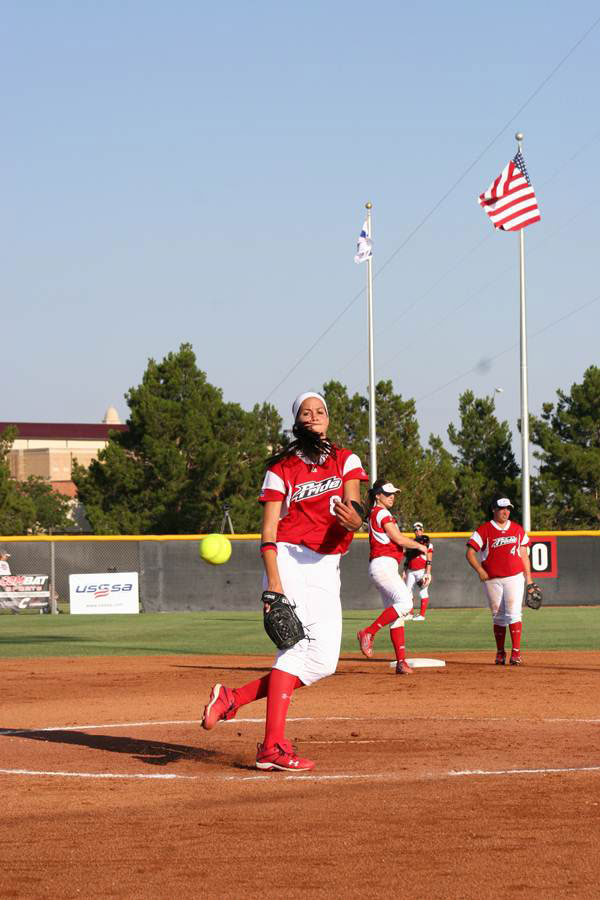 TUCSON – Jennie Finch, Taryne Mowatt, Mackenzie Vandergeest, Chelsie Mesa and Caitlin Lowe returned to Hillenbrand Stadium with an incredible greeting from the 2,623 fans in a 9-0 win for the All-Stars in perfect fashion.

NPF was led by Megan Willis out of Texas who went 3-for-3 with two home runs, three RBI and four runs scored. The All-Stars also got a home run from Francesca Enea out of Florida in the fifth.

Finch went 0-for-4 and three of the outs ended innings for the All-Stars. Vandergeest fared a little better in her return, going 2-for-3 with two doubles and three RBI. Mesa was 0-for-3 and a walk. Mowatt was 1-for-2 with two walks and a run scored. Lowe didn’t play as she recovers from ACL surgery.

The NPF All-Stars drew first blood with a two-out rally in the second. Willis got NPF’s first hit of the night with a single up the middle. Vandergeest doubled her to third before the two advanced on a Babcock wild pitch.

In her next at-bat in the fourth, Willis homered to deep center, a two-run shot to put the all-stars up 3-0. Later that inning, two walks and a Caitlin Lever single loaded the bases for former UCLA star Andrea Duran. Babcock walked Duran, bringing in Taryne Mowatt from third. Jennie Finch stepped in with the bases juiced, but grounded out to second to end the inning with the score 4-0, NPF.

In the fifth, Chelsie Mesa crushed one to left-center that would have been a gapping extra-base hit had it not been for a web-gem-esk grab, crashing into the wall in the process. The good times were short-lived, however, as the next two batters, Enea Willis, had back-to-back home runs. It was Willis’ second homer of the game and third time she crossed the plate for the All-Stars. NPF continued the threat when Babcock hit Vandergeest and gave up an infield single to Mowatt. With runners on the corners and only one out, Vicky Galindo hit a sharp liner to right field. Becca Tikey made a diving catch and doubled up Mowatt at first to end the inning.

The NPF All-Stars got on the board again in the seventh when a Vandergeest bloop-double fell safely into shallow center. The hit scored Jessica Williams from third. A Galindo walk loaded the bases for Caitlin Lever who put one between first and second bases to score a run. A bases loaded passed ball to Lever moved everyone up a bag, scoring Vandergeest and an Angeline Quiocho pop-up ended the inning.