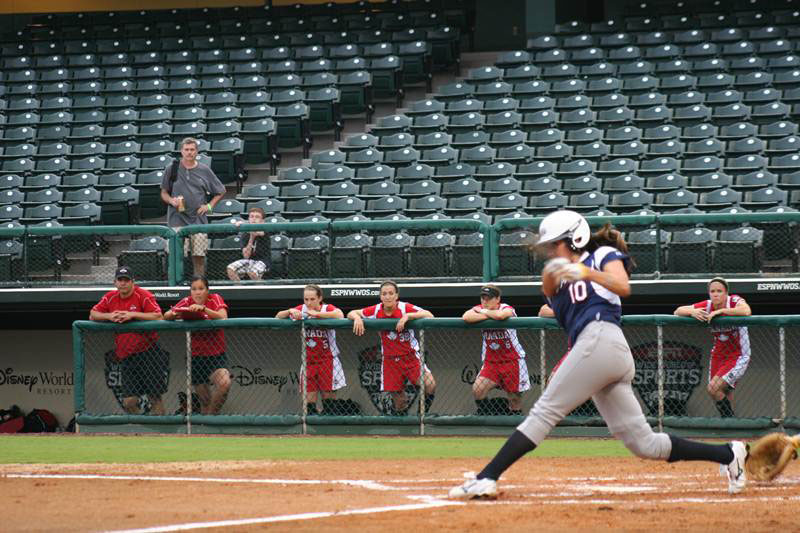 The NPF All-Star team consisted of players from professional softball teams across the country, including four Olympic athletes.

The All-Stars put three runs on the board early after errors on behalf of the Aggies. After a single by the leadoff batter Vicky Galindo, two consecutive errors by the infield let Caitlin Lever and Andrea Duran to load the bases. A couple of succeeding singles scored the All-Star base runners, putting the All-Stars up 3-0 before the Aggies’ first at-bat.

The NM State lineup faced Jamee Juarez in her first appearance this fall. No. 6 batter Teresa Conrad reached base on an error, but the Aggies struggled against Juarez.

The All-Stars put two more runs on the board during the third inning. First baseman Angie Ouiocho hit a solo homerun to cap off the first run of the inning.

The All-Stars added three runs to their lead during the fourth inning. All-Star left fielder Francesca Enea hit a two-run homerun over the left field wall to bring the score to 7-0. All-Star right fielder Taryne Mowatt followed up with a triple and later scored.

NM State finally came through at the plate in the bottom of the sixth inning. Freshman right fielder Valerie Swedberg singled up the middle for the first hit of the game for NM State. Sophomore second baseman Tehani Kaaihue singled into shallow left field to score Swedberg for the first Aggie run of the game.

In the bottom of the seventh, NM State third baseman Ashley Maroda smashed a near-homerun down the left field line, but was narrowly called fowl. Aggie First baseman Hoku Nohara was picked off at first base on the next pitch to end the game.

The Aggies continues their home fall schedule Friday, Oct. 16 with a doubleheader against Midland College and Eastern Arizona College at the NM State Softball Complex.