Davenport and Pride Look to Defend Cowles Cup Next Weekend 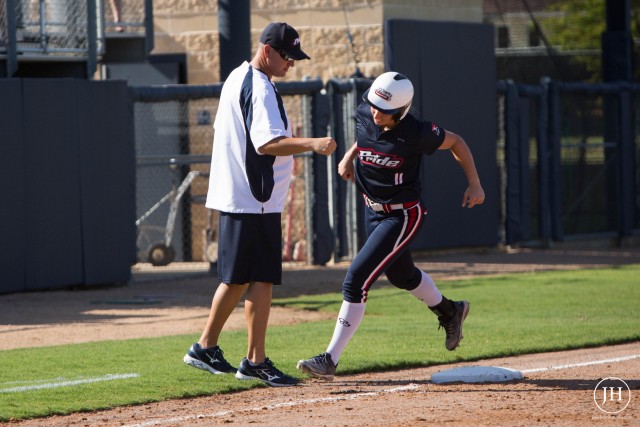 “University of North Georgia softball coach Mike Davenport is wrapping up his summer with his other team, the USSSA Pride of the National Pro Fastpitch league.” Photo by Jade Hewitt

8/7/2015- DAHLONEGA | As students arrive back to campus to prepare for the start of another academic year, University of North Georgia softball coach Mike Davenport is wrapping up his summer with his other team, the USSSA Pride of the National Pro Fastpitch league.

Just a day after returning to Dahlonega from Oklahoma City after leading North Georgia to its first-ever national championship, Davenport packed his bags and headed down to Orlando, Florida to oversee the end of camp for his 2015 Pride squad and prepare the team for the rigorous NPF regular season schedule.

“For me it was a quick transition,” Davenport said. “I don’t know if it was good or bad, but there wasn’t much time to celebrate on campus with the team and the community. It’s still somewhat surreal. When we’re on the road at the hotel I’ll get on the computer and watch some of the replays from Oklahoma City and look back to realize that was us that won the national championship.”

The UNG skipper said this summer – his first as head coach of the pro-league team – has been an awesome experience.

“I’ve been blessed to coach one of the best Division II teams in the country over the past 15 years and also to get to coach some of the best players in the world at the professional level has been truly special,” Davenport said.

With only five teams in the growing NPF, every team features its share of stars from the collegiate level but one could argue that the USSSA Pride’s lineup and depth are the best in the world. The Pride’s Natasha Watley leads the league at the plate with a .389 clip, which is 18 points higher than the next-best batting average. Watley was a four-time All-American at UCLA winning the Women’s College World Series in 2003 and an Olympic gold medal in 2004. Outfielder Kelly Kretschman is still one of the best in the world with a .348 batting average and as many home runs on the season as she has strikeouts. The University of Alabama grad was also a four-time All-American in college and also won gold with the 2004 United States Olympic team. The list doesn’t stop there either, as the Pride feature big-name newcomers including the NCAA all-time home run champ, Lauren Chamblerlain, and recent All-Americans such as Keilani Ricketts, Shelby Pendley, Hannah Rogers, and Madison Shipman, just to name a few.

One of the biggest names on the Pride roster is one of the best pitchers to ever play the game, Cat Osterman. The Texas native was a four-time All-American at the University of Texas and was a member of the last United States Olympic softball team to win gold.  Osterman, who has collected over 1,000 strikeouts in her NPF career, announced her retirement prior to the season, meaning next weekend Davenport will be the last coach to ever put Osterman’s name down on a lineup card.

“This group of women that we’re fortunate enough to have several on the Pride, what they’ve done for the game of softball is unbelievable,” Davenport said. “They’re national champions on the collegiate level, gold medalist winners at the Olympic level, but more than that, they’ve really been the face of softball over the past 15-20 years. They’re great ambassadors for the game and to get to be on the front row and watch these women that have done so much for the game of softball wrap up their tremendous careers has been an incredible experience. It’s been an honor to be the manager of these women.”

The Pride, who won the NPF regular season crown last night, will head to Hoover, Alabama next weekend – August 14-18 – to take part in the 2015 NPF Championship. Two best-of-three semifinal series on Friday and Saturday will determine who plays in the best-of-three championship series Sunday-Tuesday to crown the 2015 Cowles Cup winner.

“The City of Hoover does a tremendous job and we’re very honored to be able to hold the NPF Championship there once again,” Davenport said. “Hoover rolls out the red carpet for the players and the fans. It’s a great experience. The Hoover Met will be the nicest facility we will have played at all year. It’s really a great place to end the season and we’ll try our best to defend our Cowles Cup Championship there.”

For more information on the NPF Championship, visit profastpitch.com