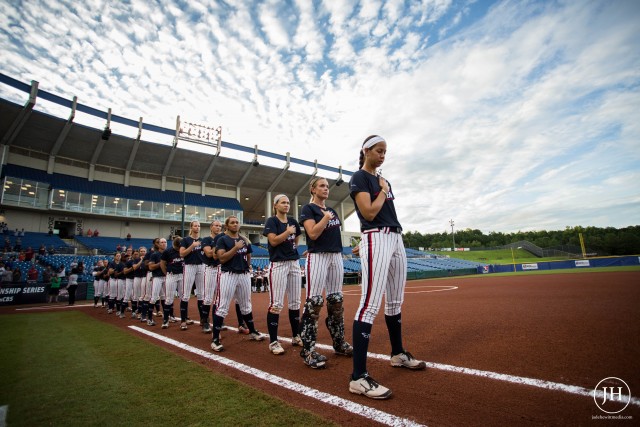 The USSSA Pride finished 34-14 and their 4th regular season NPF title in 2015. Photo by Jade Hewitt

The 2015 National Pro Fastpitch (NPF) season kicked off with lots of buzz worthy news from expansion, league television deals, a star-studded draft and a big announcement from one of the all-time greats. By the end of the season, it was the USSSA Pride hoisting the regular season championship trophy for the second consecutive year and the fourth time in Pride history. The Pride went 34-14 to capture the title before falling to the Chicago Bandits in the NPF Championship Series. Kelly Kretschman and rookie Shelby Pendley were honored with two of the league’s biggest individual awards.

For the first time since 2009, the NPF expanded to five teams with the addition of the Dallas Charge. CBS Sports Network agreed to the largest television deal in NPF history with the coverage of the NPF draft, 16 regular season games and the entire Championship Series. The 2015 NPF Player Draft featured some of college softball’s biggest names in NCAA career homerun leader Lauren Chamberlain, the two reigning NCAA Players of the Year in Lauren Haeger and Lacey Waldrop, and Shelby Pendley, the two-time Big 12 Player of the Year who finished third all-time in NCAA career homeruns. It was also the first time the draft was aired live on national television.

Perhaps the hardest news for Pride and softball fans alike was the announcement by legend Cat Osterman that the 2015 NPF season would be her last. In a May blog, Osterman wrote, “It’s with a full heart and a strong peace of mind that I can say that this will be my last summer on the field…. My heart and my head know it’s time, and my body is screaming at me that it’s time. I look forward to one last ride.”

When the 2015 season and Cat’s last ride kicked off, the Pride hit the road for seven games against the Dallas Charge in Dallas, Kansas City, and Columbia, Missouri. The two game series in Kansas City featured some of the largest crowds of the season as over 6500 fans watched the game’s best play at CommunityAmerica Ballpark. A trip to Columbia meant the return of pitcher Chelsea Thomas to her alma mater. The University of Missouri’s all-time wins and strikeout leader took the mound at University Field for the first time since her graduation in 2013.

With the addition of a fifth team came a condensed eight week season. The Pride hit the road for 24 straight days making stops throughout Ohio, Pennsylvania, and Chicago. The Pride went 14-5 on their longest road trip and played in front of capacity crowds across the Midwest and Northeast.

In the middle of July, the Pride played their only games in Florida with three straight series against Chicago, Pennsylvania and Akron at ESPN Wide World of Sports. With softball athletes and families in town for the USSSA Fastpitch World Series, USA Elite Select All American Games and World Championships, thousands of fans were able to watch the Pride and experience the NPF. Over 8000 fans gathered on July 15th to watch the Pride and Bandits after the USSSA Fastpitch Opening Ceremonies.

The last week of the regular season was a Texas homecoming and final goodbye to hometown fans for Cat Osterman. Cat threw some of her last regular season pitches at Constellation Field in Sugarland, Texas, just miles away from her hometown in Houston. She walked off the field to a standing ovation from thousands of Texas fans and her family. Her final regular season pitch came days later in her current residence of San Antonio.

The Pride claimed their fourth NPF regular season championship with a double-header sweep of the Dallas Charge on August 6th in San Antonio. They finished the regular season with a 34-14 record, three games ahead of Chicago, and entered the Championship Series with the number one seed.

Seven players made the All NPF Team including Cat Osterman and Andrea Duran. Photo by Jade Hewitt

Outfielder Kelly Kretschman was named the 2015 NPF Player of the Year.  Photo by Jade Hewitt

At the conclusion of the regular season, seven Pride players individually took home some hardware. Veteran Kelly Kretschman, the oldest player in the NPF, earned the league’s most prestigious award as the 35 year old was named NPF Player of the Year presented by Mizuno. Kretschman enjoyed her best professional season hitting .338 with 7 homeruns, 22 RBIs, and swiping a perfect 10-10 stolen bases. She ranked in the top five for eight offensive categories including 2nd in stolen bases, total bases, and sac flies, 3rd in total hits, 4th  in batting average, slugging percentage, and runs scored, and tied for 5th  in homeruns.

Shelby Pendley became the third Pride player to earn Rookie of the Year honors. The second overall pick and former Oklahoma Sooner led all rookies in 8 offensive categories including hits, slugging percentage, homeruns and RBIs. Her 10 doubles ranked second in the NPF and her .519 slugging percentage ranked fifth. She joined Madison Shipman and Kristyn Sandberg as Rookie of the Year winners for the Pride.

Osterman was recognized as the Jennie Finch Award winner for her excellence on and off the field. In her eight year career, she won four NPF Championships and was named NPF Pitcher of the Year three times. She was also named to the 2015 All NPF Team for the fifth time in her career after going 14-2 with a 1.35 ERA and league best 164 strikeouts. Osterman threw 9 complete games including a no-hitter on July 10th against Pennsylvania.

Seven players made the All NPF Team including Kretschman, Pendley and Osterman. Andrea Duran was named as a third basemen, Natasha Watley as an outfielder, Jordan Taylor earned her first nod as an All-NPF pitcher, and outfielder Megan Wiggins was named as an at-large pick. Watley led the NPF with her .390 batting average and ended the regular season with a 17 game hit streak. Taylor set a NPF record with 11 saves and had a 0.51 ERA, second best in the NPF behind Monica Abbott.

Cat Osterman retired from the NPF following the 2015 season. She went 14-4 in her final season and led the league in strikeouts once again. Photo by Jade Hewitt

Entering the NPF Championship Series as the number one seed, the Pride swept the fourth seeded Dallas Charge in two games. Osterman and Thomas picked up the wins as Madison Shipman and Pendley led the offense to 8-1 and 8-7 victories.

Their series win set up a 2013 Championship Series rematch with the Chicago Bandits. It also featured one of the best pitching match-ups in softball history—Cat Osterman vs. Monica Abbott. The two pitchers showed why they are the best in the world as neither gave up an earned run in either of the games. In the end, it was Abbott and the Bandits hoisting the Cowles Cup in front of a nationally televised audience on CBS Sports Network. The Bandits used a pair of 1-0 victories to capture their first title since 2011.

As the 2015 season concluded, we said goodbye to some of the best players the NPF and the sport have ever seen. Players that helped pave the way for the next generations of great players. But we also welcomed many new faces and future NPF stars. This past summer we saw many signs of growth from expansion, national television coverage, and capacity crowds across the country. The 2015 season will be remembered as a catalyst for the growth and future of professional softball.