A Look Back on the Pride’s 2015 NPF Award Winners 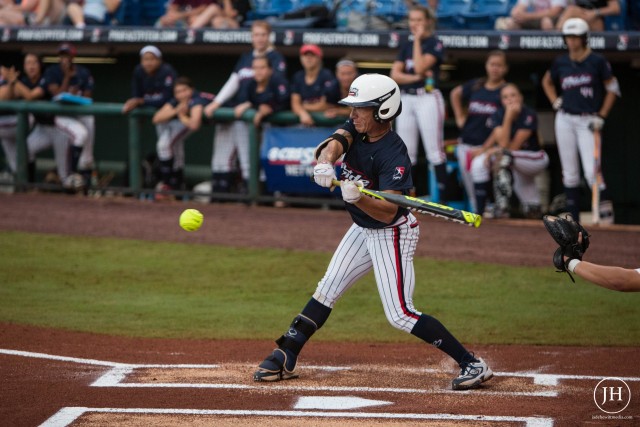 Kelly Kretschman was named the 2015 NPF Player of the Year for the first time in her career. Photo by Jade Hewitt

The 2015 National Pro Fastpitch (NPF) was once again a season full of hardware for the USSSA Pride. With one of their youngest rosters in their seven-year existence, the Pride used a combination of experience and youth to capture their second consecutive NPF regular season title. The Pride went 34-14 en route to their fourth NPF regular season championship.

At the conclusion of the regular season, several Pride players were recognized for their individual achievements. For the second consecutive year, the Pride took home NPF Player and NPF Rookie of the Year honors. Additionally, Cat Osterman was honored as the Jennie Finch Award Winner and seven Pride players were selected to the 2015 All NPF Team.

The biggest individual award went to one of the game’s oldest and most decorated players. In her 10th NPF season, outfielder Kelly Kretschman was named the Mizuno Player of the Year for the first time in her illustrious career. Kretschman enjoyed her best professional season hitting .338 with 7 homeruns, 22 RBIs, and swiping a perfect 10-10 stolen bases. She ranked in the top five for eight offensive categories including 2nd in stolen bases, total bases, and sac flies, 3rd in total hits, 4th  in batting average, slugging percentage, and runs scored, and tied for 5th  in homeruns. The 35-year-old Kretschman started 46 of 48 games and was the Pride’s most consistent offensive threat throughout the season.

Rookie of the Year Shelby Pendley led all rookies in 8 offensive categories. Photo by Jade Hewitt

Shelby Pendley began her rookie season right where she left off at the University of Oklahoma. The 2nd overall pick went 4-4 in her rookie debut including her first NPF career homerun. Pendley took home Rookie of the Year honors after hitting .302 with 10 doubles, 6 homeruns, 11 walks and 22 runs scored. She led all rookies in hits, slugging percentage, homeruns, RBIs, runs, OBP, and total bases. Her 10 doubles ranked 2nd in the NPF and her .519 slugging percentage ranked fifth. Pendley becomes the third Pride player to win Rookie of the Year joining Madison Shipman (2014) and Kristyn Sandberg (2012).

The Jennie Finch Award was created in 2010 to honor one player for her excellence on and off the field. Cat Osterman, Finch’s former Team USA teammate, was honored as this year’s recipient. Osterman announced her retirement from the NPF before the 2015 season. In her eight year NPF career, she won four NPF Championships and was named NPF Pitcher of the Year three times.

The All-NPF team included 18 players and seven of them hailed from the Pride including Kretschman and Pendley. Andrea Duran, last year’s NPF Player of the Year, was the third base selection on the All NPF Team. Duran hit .270 with 6 homeruns, 7 doubles, and 26 RBIs all while playing a shutdown third base.

All Natasha Watley did was lead the league in batting average for the second consecutive year. The All NPF outfielder hit .390 on the year and ended the regular season on a 17 game hit streak. Her .438 OBP ranked third and her 46 hits ranked fifth in the NPF.

Osterman, last year’s NPF Pitcher of the Year, was named to the All NPF team for the fifth time in her career. The lefty went 13-2 with a 1.35 ERA and led the league with 164 strikeouts in 103.1 innings pitched. She threw 9 complete games including a no-hitter against the Rebellion on July 10th. Opponents hit .149 against Osterman.

Jordan Taylor accepted and thrived in the role of closer this year. Her 11 saves set a NPF record and her miniscule 0.51 ERA ranked second in the NPF behind Abbott. Opponents mustered a .143 batting average against Taylor as she earned her first career All NPF award.

Pride newcomer Megan Wiggins continued her dominance as one of the game’s most feared hitters. The former Player of the Year hit .286 with 7 homeruns, 29 RBIs, and 18 runs scored. She ranked second in RBIs and anchored the Pride outfield in centerfield.

The 2015 All NPF Team presented by Combat included: