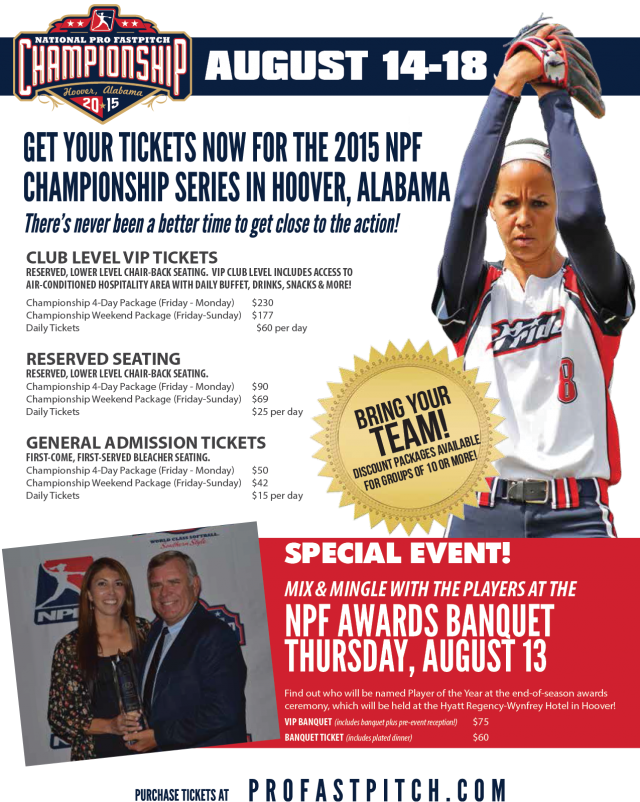 Kissimmee, FL -July 29- With the 2015 regular season ending  for the USSSA Pride next Friday, its time to make preparations for the post season.

All 2015 NPF Championship Series games will be broadcasted live on CBS Sports Network. The first time in NPF history this feat has occurred.

Tickets are on sale at profastpitch.com now and will be available at the Hoover Met ticket office beginning August 14. Tickets may also be purchased on the day of the event.

Prices range from $15 to $230 depending on the package you choose. Discount packages are available for groups of 10 or more. Senior citizens, active duty military and students may purchase discounted tickets as well. Children under the age of 3 are admitted free of charge. “In addition to the group discounts, corporate ticket and hospitality packages are available as well as charitable ticket giving options.”

In addition to the games, there is an opportunity to attend the annual Championship Series Awards Banquet and reception. For an individual it is priced at $60 with an added pre-banquet reception option of $15. A catered meal is included along with the league awards presentation. Banquet tickets must be purchased in advance of the event.

Learn more about the 2015 Championship Series Ticket Packages and the competition schedule at profastpitch.com.

The USSSA Pride currently stand in first place with a 29-12 record. Four games ahead of the Chicago Bandits. The Pride and the Bandits will face each other tonight in Peoria, Il at 8:00 PM (ET).