The Pride defeat the Charge in Regular Season Series Finale 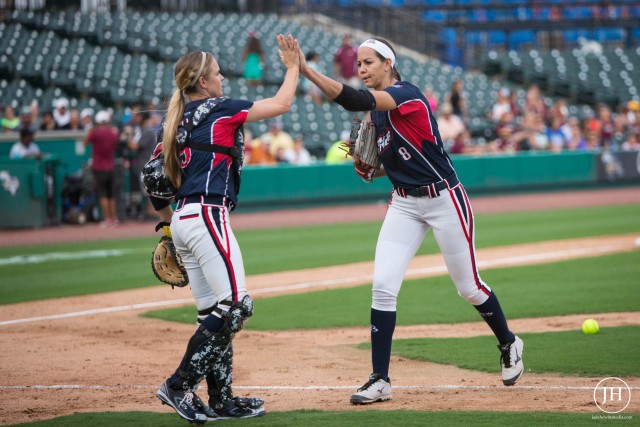 San Antonio, TX – August 7, 2015 – DALLAS CHARGE:  The USSSA Pride beat the Dallas Charge for the third consecutive game to wrap up their 2015 regular season campaign.  Cat Osterman got the start and win for the Pride in her final regular game.  The 7-3 victory over the Charge was the Pride’s 34th against 14 losses.  Osterman improved to 14-2 in the circle.  Andi Williamson collected the save for the Pride, her first of the season.  Morgan Melloh suffered the lost giving up four runs in just over one inning of work.

The Pride struck early.  Melloh hit Natasha Watley and then walked Hallie Wilson.  After a ground out to second base, Andrea Duran tapped a ground ball to shortstop to plate Watley and give the Pride a 1-0 lead after the 1st inning.

In the second inning, the Pride opened the game up with two long balls.  The first by Watley was a three run bomb to right.  Watley’s round tripper chased Melloh in favor of Lauren Haeger, who forced a ground out before Megan Wiggins homered extending the lead to 5-0.

Finally, in the fifth, the home team battled back.  Nadia Taylor, who had been hit by a pitch in her first at bat, doubled to left center bringing home Taylor Thom and Kylee Lahners, narrowing the gap to 5-2.

The Pride got those two runs back in the top of the seventh when Wilson doubled down the left field line driving in Breja’e Washington and GiOnna Disalvatore.

Haeger hit a solo blast to left in the bottom of the seventh making the final score 7-3.  Haeger went 5.2 innings in the circle, striking out eight, walking one and allowing just two earned runs.

Osterman pitched 5.1 innings, fanned four, walked one and also allowed two earned runs.  With the last game of this 2015 NPF regular season, Osterman’s league leading 164 strikeouts have already topped her 160 at the completion of the 2014 season.

The Charge out hit the Pride eight to six in the loss.