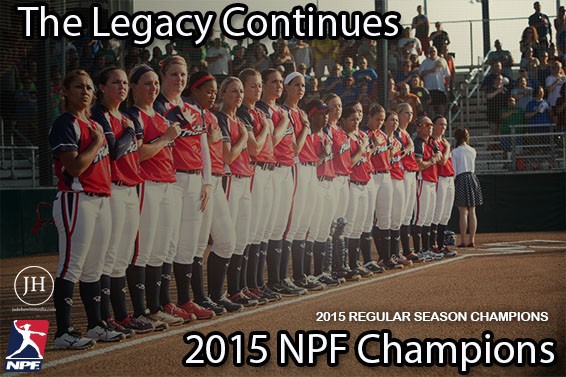 On the night, Shelby Pendley went a combined 3-6 with 2 HR’s! Photo by Kit Mohr

In game one, which was a makeup for an earlier season rainout, Chelsea Thomas tossed a complete game 3-hit shutout helping the Pride to a 4-0 win.  Thomas fanned eight, walked three and improved to 8-3 on the season.  The Charge’s Jolene Henderson suffered the loss allowing four earned runs on seven hits.  She struck out two and walked two.

Shelby Pendley went 2 for 3 with a solo bomb in the second inning staking the Pride to an early 1-0 lead.  In the fifth, the Pride scored three to put the game away.  The Pride loaded the bases before Kelly Kretschman’s sacrifice fly to left and Megan Wiggins’ (1-3, 2 RBI, 1-2B) double to right center cleared the bases, making the score 4-0.  The Charge failed to mount a serious challenge in their last two at bats, securing the game one win for the Pride.

In the night camp, former Florida teammates squared off in the circle.  Hannah Rogers pitched for the Pride and Lauren Haeger for the Charge.

The Charge jumped out to an early lead when Rogers misplayed a two out popup with runners at second and third, allowing one run to score.  A passed ball brought home run number two.

The Charge held the 2-0 lead until the bottom of the fifth when the Pride struck for four quick runs.  Pendley (1-3, 1 run, 1 RBI, 1 HR) hit her second homer of the night, a no-doubt solo blast to right.  With two on and two out, Brigette Del Ponte (1-2, 2 runs, 3 RBI, 1-HR) mashed a pinch-hit bomb over the left field fence giving the Pride their first lead of the game, 4-2.

The visitors responded in the sixth with two to tie the game at four.  Nicole Morgan started things with a single and moved to second on a throwing error.  The hit signaled the end of the night for Rogers who was relieved by Keilani Ricketts.  A sacrifice bunt from Taylor Thom moved Kahley Novak, who entered to run for Morgan, to third.  Nadia Taylor drove her home with a single up the middle.  Brianna Cherry walked, pushing Taylor to second.  Kylee Lahners hit a sharp ground ball to the shortstop’s right.  The ball was kicked into shallow left field.  Taylor, running from second, was beaten to home by the throw, but athletically eluded the catcher to tie the game.

Jordan Taylor, the league leader in saves, came on in relief of Ricketts and put out the fire with a strikeout.

In the eighth inning, the International Tie Breaker rule came into effect, and the Charge failed to score in their at bat.  The Pride expertly moved Del Ponte to third with a bunt before Wiggins hit a sharp ground ball to second.  Del Ponte’s head first slide beat the throw to the plate to give the Pride the victory and regular season crown.

Taylor collected the win in the circle for the Pride and Morgan Melloh, who relieved Haeger in the sixth, was charged with the loss.

The Pride and Charge will face off again Friday evening (8/7/15) at 8pm ET at St. Mary’s, where the Pride’s regular season game will come to an end.

Pride Fall to Charge in Texas, 3-0
The Pride defeat the Charge in Regular Season Series Finale