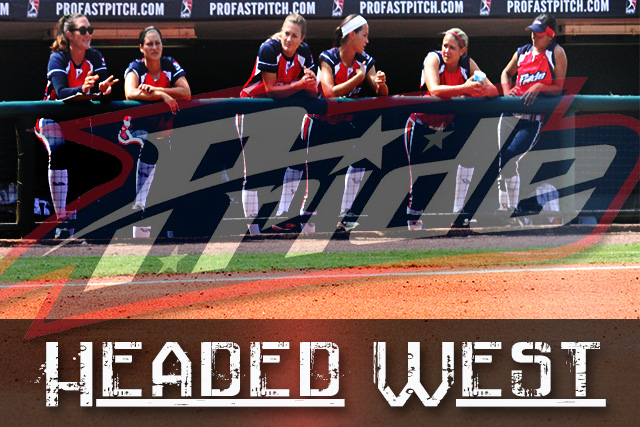 The USSSA Pride will play 5 games in California and Arizona as part of their 2015 Fall Tour. Photo by Jade Hewitt

Kissimmee, FL–USSSA is pleased to announce professional softball is headed west. The USSSA Pride will makes stops at Arizona State, Cal State Fullerton, Cal State Northridge, Cal Poly, and Fresno State during their 2015 fall tour. While on the west coast, Pride players will help host USA Elite Select Regional Elite camps and Futures tryouts in Arizona and California. This marks the third year USSSA has sponsored a fall tour with the goal of exposing new markets to the National Pro Fastpitch (NPF) and USSSA fastpitch.

The Fall Tour offers fans exposure to some of the game’s greatest players, a majority of which called the west coast home whether growing up or during their college careers. Eight of the players participating in the tour hail from California including 2014 National Pro Fastpitch (NPF) Player of the Year and Olympian Andrea Duran, 2015 Pac-12 Defensive Player of the Year Hallie Wilson, 2014 NCAA batting champ Courtney Ceo, 2013 Pac-12 Player of the Year Amber Freeman, Chelsea Goodacre, Amanda Kamekona, Emilee Koerner, and Breja’e Washington. Brigette Del Ponte and Megan Willis, who will be coaching the tour team, both hail from Arizona while GiOnna DiSalvatore played her college ball at UCLA. The two pitchers on the fall tour staff include 2014 WCWS Most Outstanding Player Hannah Rogers and 2013 NPF Rookie of the Year Andi Williamson.

Besides playing the colleges, the Pride will also be working with USA Elite Select at our All American Elite camps and Futures tryouts. USA Elite Select, the elite division of USSSA fastpitch, is hosting elite camps and qualifiers in Phoenix, Cathedral City, and the Sacramento area during the fall tour. Pride players will work the camps as instructors and be present at many of the qualifiers. They will also be doing appearances throughout the west coast exposing the next generation of elite players to the journey of professional softball.

Andrea Duran discussed her excitement about returning to the west coast.

“Playing on the west coast this fall is going to be very exciting not only because I grew up in California and went to UCLA but because we are playing in front of our west coast fans and get to show the west coast what the NPF and USSSA is all about. Any opportunity we get to play in different states and different markets is very beneficial to the future of the NPF. The more exposure the league get’s the more likely it is to grow and expand. The ultimate goal of the NPF is to have teams all over the US and hopefully the fall tour will be a great launching off point of getting a team or teams out west.

The 2015 Fall Tour kicks off at perennial top-25 powerhouse Arizona State on October 8th. The Sun Devils finished the 2015 season with a 36-22 record and tough NCAA Regional loss to LSU. Pride rookie Amber Freeman returns to her alma mater where she was one of the most decorated hitters in Sun Devil history. The Arizona State program has won two WCWS National Championships—2008 and 2011.

On October 14th, the Pride will play Cal State Fullerton at Anderson Family Field in Fullerton. Historically, Fullerton has been one of the top college softball programs with six WCWS appearances and a 1986 National Championship. Fullerton finished 2015 with a 34-22 record and fourth place finish in the Big West. Senior Missy Taukiaho was a 2015 NFCA All-American.

The Pride will face Cal State Northridge on October 17th at the Matador Diamond. Northridge, the 2015 Big West Champions, finished 2015 with a 41-17 record.  Junior Katie Hooper was the 2015 Big West Player of the Year and head coach Tairia Flowers, an Olympic gold medalist with Team USA, was named Big West Coach of the Year. The Pride’s Natasha Watley serves as the Director of Operations for Northridge when she’s home from Japan.

Following the game with Northridge, the Pride will play Cal Poly on October 19th in San Luis Obispo at Bob Janssen Field. Cal Poly, also from the Big West Conference, is coming off a 22-33 record. Associate Head Coach Gina Vecchione was the assistant coach at UCLA during the college careers of Andrea Duran, GiOnna DiSalvatore, and Amanda Kamekona.

The Pride will then head north to play Fresno State on October 21st at Margie Wright Diamond in Fresno. The Bulldogs are one of the winningest programs in NCAA softball history. Former head coach Margie Wright amassed a NCAA record 1294 wins at Fresno State, one National Championship, 21 conference titles and 12 WCWS appearances. Margie Wright Diamond is one of the premier facilities in the country. For years, Fresno State led the country in attendance and still hold the NCAA’s largest regular season crowd with 5724 fans (March 14, 2000 vs. Arizona).

“We are all very excited to return home and play in front friends, family and fans so come on out to a game and support the Pride and the NPF!” said Duran.