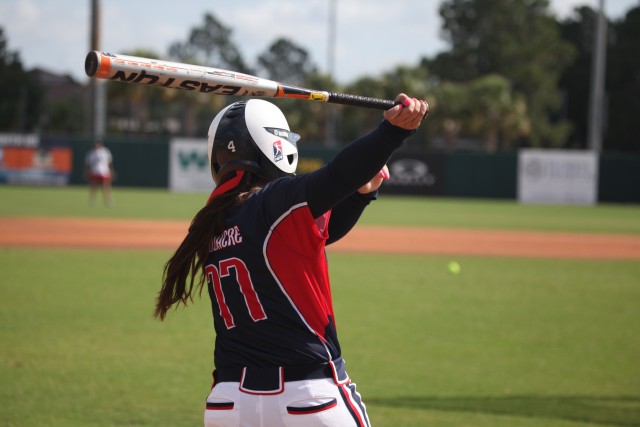 Cat Osterman gets the save for the Pride in their 12 inning, 4-3 win over the Rebellion. Photo courtesy of Jade Hewitt.

YORK, PA—June 26, 2015- The USSSA Pride and Pennsylvania Rebellion took their talents to Central Pennsylvania on Thursday, June 25 when they squared off at Santander Stadium for a neutral site contest. The Pride edged the Rebellion by a final score of 4-3 in a game that lasted 12 innings.

PA jumped on the board first in their first at-bat from York, PA. After leading off with a single and reaching third on an error, center fielder Yuri Masuyama scored off of a sacrifice fly from designated player Cheyenne Cordes.

The Rebellion added a security run to their lead in the bottom of the fifth inning when Mandy Ogle notched a pinch-hit home run to left. The Pride was able to answer with two dingers of their own in their next at-bats, tying the game at 2-2. Home runs were credited to Brigette Del Ponte and Kelly Kretschman.

It took until the 11th inning for either team to break the tie, with USSSA scoring first in extra innings off of a Megan Wiggins RBI single. A wild pitch from Cat Osterman, who was brought in, in the 11th for the potential save, allowed Maddie O’Brien to score for PA.

A run-scoring single from Chelsea Goodacre in the top of the 12th proved to be the deciding hit, giving the late-night victory to the Pride by a final score of 4-3.

The Pride and Rebellion will resume play on Friday, June 26 when they travel to their second neutral site in as many days. Beginning at 6:35 p.m., the Rebellion and USSSA will face off from Clipper Magazine Stadium in Lancaster, PA. Fans can listen to all of the action via msasports.net/broadcasts.