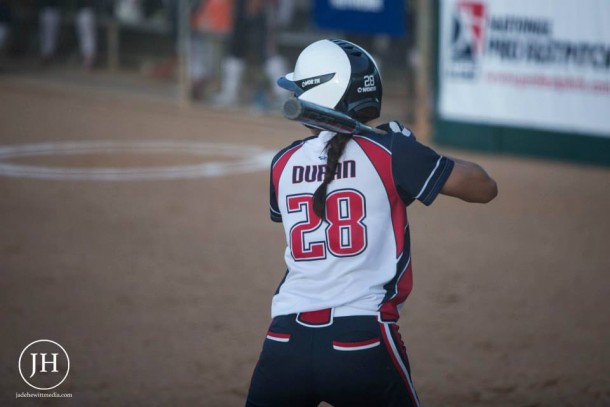 Chamberlain hit her first career home run against the Rebellion Friday night to give the Pride a 4-2 win. Photo by Jade Hewitt

Lancaster,PA—June 26, 2015-The Pennsylvania Rebellion and USSSA Pride found themselves in extra innings for the second-straight evening, but a two-run homer by rookie Lauren Chamberlain in the top of the 10th inning was enough to give the Pride the late-night victory by a final score of 4-2 from Clipper Magazine Stadium in Lancaster, PA.

USSSA jumped out early to a 2-0 lead in the top of the second when third baseman Andrea Duran notched a solo home run to left-center followed by a sacrifice fly from Megan Willis that plated shortstop Shelby Pendley. The Rebellion answered with a run of their own in the bottom half of the inning when center fielder Courtney Senas hit a sacrifice fly of her own to score designated player Mandy Ogle, who reached base on a hit-by-pitch.

Despite the run in the second, the Rebellion were held hitless against USSSA starter Cat Osterman until the fourth inning when catcher Kristyn Sandberg belted a solo home run to right field to knot the game at 2-2. On the night, Osterman tossed seven innings allowing just one hit, two runs and nine strikeouts.

Osterman’s opponent, Rebellion hurler Emma Johnson was just as dominant in the circle for PA. After the two-run second, Johnson managed to pitch her way out of three situations where the Pride had runners in scoring position. She finished her seven-inning outing allowing seven hits, three walks and tossed three strikeouts.

Neither team was able to score in regulation, forcing extra innings for the second-consecutive night. With the international tiebreaker in effect, Chamberlain broke the stalemate with a 2-1, two out, two-run dinger, Chamberlain’s first career home run that would award the Pride the win. The Rebellion were unable to answer in their final hacks, awarding the game to USSSA by a 4-2 final. Haylie Wagner suffered the loss, while Jordan Taylor picked up the win.

The Pennsylvania Rebellion and USSSA will conclude their neutral site series tomorrow, June 27 from Clipper Magazine Stadium at 6:35 p.m. Fans can listen to all of the Rebellion play-by-play via msasports.net/broadcasts or follow along via Twitter @USSSAPride