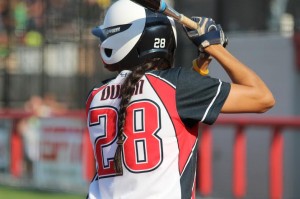 Duran was 3-4 on the day with 3 RBIs. Photo courtesy of Christina V. Ferrante

Akron, OH-August 10, 2014–It was a hot Sunday afternoon at Firestone Stadium, as the USSSA Florida Pride and Akron Racers took the field for their final game of the series.

The Pride jumped to an early lead, when Caitlin Lowe doubled and advanced to third on a wild pitch from Racers starter Lisa Norris. Kelly Kretschman then reached on an error by Charlotte Morgan that allowed Lowe to score.
In the second inning, the Pride put up five more runs. After Norris walked GiOnna DiSalvatore, Kristyn Sandberg, Natasha Watley, Lowe, Kretschman and Andrea Duran all singled, producing five more runs for the Pride. That would end Norris’ day, having thrown 1.2 innings and allowing six runs (four earned) on six hits, walking one. Rachele Fico entered the game and got Amanda Kamekona to fly out to left to end the inning.
The Racers responded in the bottom of the inning with a solo home run off the bat of Taylor Schlopy.
The Pride extended their lead in the 4th inning after Brejae Washington reached base on an error by catcher Jessica Garcia. Watley then reached on a fielder’s choice, as the Racers got Washington out at second. A fielding error by Nerissa Myers allowed Lowe to reach base, as Watley moved into scoring position. Kretschman’s single then plated Watley and allowed Kretschman to advance to second on the throw home. Duran followed suit and singled to center to drive in Kretschman. The Racers answered with a relief pitcher, bringing in Lannah Campbell to finish the inning, as she got Kamekona to line out to center field.
Fico threw 1.2 innings and allowed two runs on three hits. Campbell would complete the game for the Racers, throwing the final 3.2 innings and allowing no runs on three hits, walking one and striking out one.
The Racers would add a run in the bottom of the 7th, when Olivia Watkins singled and advanced to second on a wild pitch. Ayumi Karino grounded out and moved Watkins to third before Haley Outon reached on an error by Keilani Ricketts that allowed Watkins to score. The Racers comeback would fall short though, as they didn’t add another run, and fell to the Pride 8-2.
Keilani Ricketts (5-6) got the complete game victory as she gave up two earned runs on five hits while striking out six. Duran finished the day going 3-4 with 3 RBIs and Kretschman finished 2-3 with 3 RBIs. Lowe’s 1-4 performance extended her hit streak to 19 games.
The Pride will host the PA Rebellion Thursday through Saturday at Osceola County Stadium for their final regular season series in 2014. They will then head to Hoover, Alabama for the National Pro Fastpitch Championship Series. For tickets visit our website www.dev.usssapride.com.
Box Score: Click Here
Site: Firestone Stadium – Akron, OH
Score: Pride 8, Racers 2
Records: Racers (22-22) Pride (30-14)
Next Pride Game: Thursday, August 14 at 7:05pm ET vs. PA Rebellion
About USSSA Florida Pride: The USSSA Florida Pride is a professional franchise in the National Pro Fastpitch League that is owned and operated by USSSA. The amateur organization of USSSA has multi-sport coverage and encompasses teams and players from the United States and abroad.  About NPF: National Pro Fastpitch is headquartered in Nashville, TN. The league, created to give elite female fastpitch players the opportunity to pursue a professional career in their chosen sport, has operated since 1997 under the names of Women’s Pro Fastpitch (WPF) and Women’s Pro Softball League (WPSL). NPF is the Official Development Partner of Major League Baseball in the category of women’s fastpitch softball since 2002. About USSSA: The United States Specialty Sports Association (USSSA), headquartered in Osceola County, Florida, USSSA is the World’s Largest Multi-sport Athletic Organization. Founded in 1968, USSSA has grown to over 3.7 million participants, competing in 13 nationally sanctioned sports including Baseball, Fastpitch, Slow Pitch, Karate, Basketball, Soccer and more! For more information on USSSA and to register your team visit USSSA.com. Also be sure to visit USSSAToday.com for the latest USSSA.
Related TopicsAkron RacersNational Pro FastpitchProfessional SoftballUSSSA Florida PrideUSSSA Pride

A 4-Run 4th Inning is all Osterman Needs to Beat Racers 4-2
Chelsea Thomas: The Pride of Pleasantville