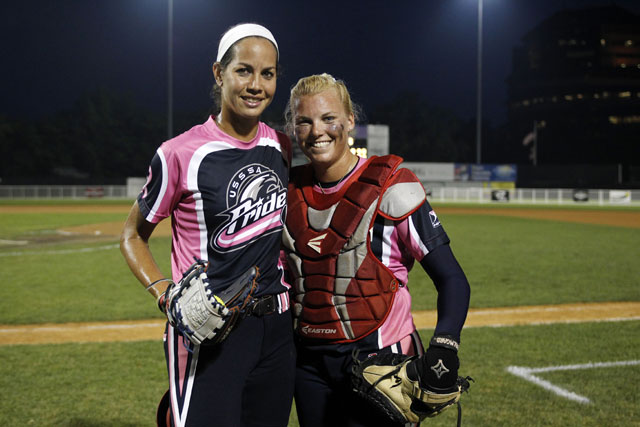 Little Falls, NJ – July 20, 2013 – The USSSA Pride and the NY/NJ Comets kicked off a much anticipated 4 game series last night in Little Falls, NJ on the campus of Montclair State University. It was the return of professional  fastpitch softball to the northeast for the first time in five years.

The site was Yogi Berra Stadium – the Yogi Berra museum evident in the backdrop with the Yankee legend’s number 8 prominently positioned on the window facing the playing field. And for the NY/NJ Comets, it was like deja vu all over again as softball’s legendary number 8, Cat Osterman, threw the second no-hitter of her final professional season.  The final score? USSSA Pride 8, NY/Comets 0. It was the second time the Comets had been the victim, with Osterman twirling the first no-no just over a month ago in Florida.

Osterman kept the Comet’s bats quiet as she faced just one batter over the minimum en route to 11 strikeouts. The complete game win moves Osterman to 10-2, with a league leading 143 total strikeouts and 1.00 ERA.

The story was opposite for the Pride offense as they racked up 11 hits and 5 walks without a single strikeout to tally 8 runs on the night.

Gionna DiSalvatore once again led the Pride attack going 3-4 with 2 RBIs. Ashley Charters chipped in a 2 for 3 night with a run scored. Caitlin Lowe finished with a 2 for 4 with 1 run performance. Andrea Duran provided some mid-July fireworks in the 5th with a 2 run blast to left.

Lindsey Richardson started for the Comets yielding 5 earned runs on 8 hits and 2 walks in 4.2 innings. Angel Bunner came on in relief in the middle of the 5th inning and went the rest of the way for the home team giving up 3 earned runs on 3 hits and 3 walks.

The teams will square off again today in a double header. Game 1 is scheduled for 2:00 p.m. EST followed by game 2 at approximately 5:00 EST. Game 1 will be broadcast live on ESPN2.