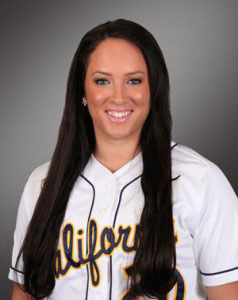 Three-time All-American Valerie Arioto and USSSA Pride Draftee of the University of California has been selected as the 2012 Lowe’s Senior CLASS Award winner in NCAA® Division I softball. The announcement and trophy presentation were made on June 1st by Lowe’s, an official corporate partner of the NCAA, during the NCAA Women’s College World Series®.

“I am honored to have won the Lowe’s Senior CLASS Award. I am very grateful to have been included among so many other talented and giving student-athletes. This award means a lot to me because it’s not just about success on the field,” Arioto said. “While I have enjoyed my softball accomplishments and will never forget my experiences with my teammates, it’s giving back to my community and the degree I received from the University of California that mean so much to me. My family, coaches and teammates have been instrumental in all of my success – both on and off the field. I was floored by the fan support, and my team and I would not be where we are without their continued devotion.”

Arioto’s new Pro team The USSSA Pride is extremely proud to have another Lowe’s award winner as a part of their team.