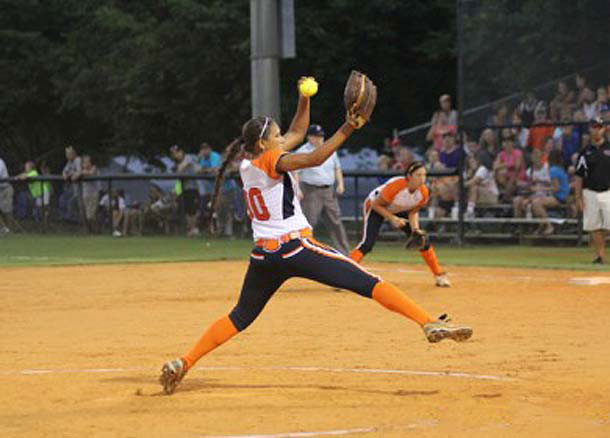 Calgary, Alberta – Down 2-0 after the first inning the NPF Tennessee Diamonds scored three runs in the bottom of the sixth inning to defeat the USSSA Florida Pride 3-2 at Foothills Stadium in Calgary, Alberta. After taking the lead the Diamonds held on by leaving the bases loaded in the final inning. Danielle Spaulding was terrific for the Diamonds throwing the complete seven inning game and allowing two runs while striking out seven.

The Pride opened the scoring in the top of the first inning when Alissa Haber was hit by a pitch during an 11 pitch at-bat, Jessica Mendoza singled, Kelley Kretschman walked to load the bases, and Melissa Roth knocked in two runs with a double for a 2-0 lead.

In the bottom of the sixth the Diamonds broke through as Bianca Mejia singled, Loryn Johnson was hit by a pitch, Megan Gibson doubled in a run, Brianna Hesson collected a sacrifice fly to tie the game, and with two outs Brittany McKinney drove in a run with a base hit for a 3-2 lead.

In the top of the 7th inning, Ashley Charters led off the inning with a single for the Pride. Caitlin Lowe’s sacrifice bunt would move the tying run into scoring position, bringing up Haber who would hit a liner off of Danielle Spaulding, but Spaulding would still record the out at first but moving Charters to 3rd. After back to back walks by Mendoza and Kretschman, Charlotte Morgan would come on to pinch hit for Roth but would fail to hit in the tying run, grounding out to Biancca Mejia for the final out of the game, giving Danielle Spaulding her second win as a Diamond pitcher and her first win against her former team.

The Pride return to action tomorrow night continuing their series with NPF Diamonds at QuikTrip Park in Grand Prairie, TX. You can follow the action live on dev.usssapride.com