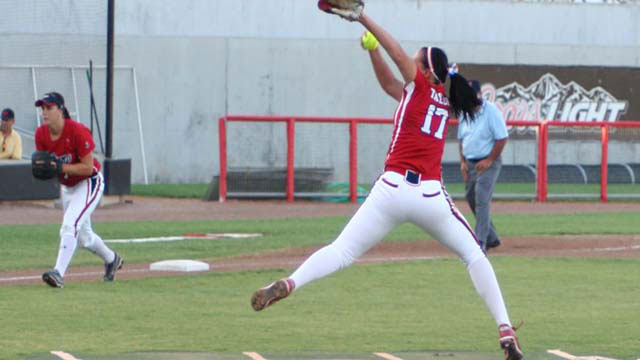 Grand Praire, TX- The USSSA Pride and the NPF Diamonds traveled to Grand Prairie, Texas early Friday morning after playing three games in Calgary, Canada. The Pride were victorious in the first two contests, aiming to sweep the Diamonds but they could not hold off a late game surge by Danielle Spaulding and the Diamonds offense as they fell 3-2.

The USSSA Pride sent Jordan Taylor (1-0) to the mound to face the Diamonds own Morgan Melloh (3-11).

Taylor would enter into a first inning jam after retiring Mejia on a groundout, Loryn Johnson would line a double to left center, putting a runner in scoring position. She would not be phased as she would strike out the next two batters to retire the side.

The USSSA Pride got on the board first in the second inning as Jessica Mendoza would hit a lead off solo home run to left field, putting the Pride up 1-0. Charlotte Morgan would draw a walk and be pushed into scoring position by a sacrifice bunt by Ashley Charters. The Pride wouldn’t be able to capitalize as Tonya Callahan would pop out to first to end the inning.

The Diamonds would have a bases loaded opportunity in the top of the third as a Biannca Mejia single would push Jessica Bachkora to second. Loryn Johnson would come up and single up the middle to load the bases. Megan Gibson would hit into a fielders choice and the Pride would get the force out at home, bringing up Brianna Hesson who would go down swinging to end the inning.

A scary moment would come in the bottom of the 5th as a Caitlin Lowe line drive would hit Diamond pitcher Morgan Melloh in the head, forcing her to leave the game unable to continue. Rhiannon Kliesing would come on to get the third out, striking out Alissa Haber to end the fifth.

After retiring the Diamonds in order, the Pride got some insurance in the 6th as a wild throw by Diamonds catcher Brittany McKinney was sent into left field, allowing Mendoza to easily score from third after reaching base earlier in the inning on a walk. The Pride would lead 2-0 going into the top of the 7th.

Jordan Taylor would continue her solid outting, retiring the side in the 7th inning holding the Diamonds scoreless and winning her second game of the year. The win gives the Pride their 26th win of the season and their 19th victory in their last 20 games. Taylor would finish the game having given up no runs on 5 hits, striking out 9 and walking none. Morgan Melloh would be credited her 12th loss of the season, giving up 1 run on three hits, while walking two and striking out 1.

With the win tonight the USSSA Pride clinched the NPF regular season championship, their franchise first.

The USSSA Pride will face off again against the NPF Diamonds at QuikTrip Park in Grand Praire, Texas tomorrow at 7:05pm, 8:05 ET. The Pride will send Olympic Gold Medalist Cat Osterman (12-2) to the mound in what will be another exciting showcase of the best softball in the world. Come out and support the NPF and your favorite team!