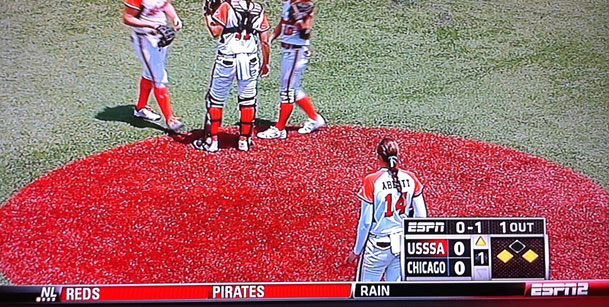 Sulphur, LA – If the remainder of the quest for the Cowles Cup goes the way game 1 in the best of 3 series went, softball fans won’t be disappointed.  Game 1 of the championship round was a thriller that was decided in 8 innings with the 3 seed Chicago Bandits taking the early advantage over the defending league champion and series favorite, USSSA Florida Pride with a 4-3 win at McMurry Park.

The Pride had an early 2-0 lead before Megan Wiggins lined a 3 RBI double off of Cat Osterman in the 5th to put the Bandits ahead.  Two pitches later Osterman would be replaced by Sarah Pauly after she went down to the ground holding her pitching arm in obvious pain.

The Pride was resilient as they have been all year, in the bottom of the 7th Andrea Duran took Bandits ace Monica Abbott deep to tie the game on a solo shot to left to send the game to extra innings.  Abbott struck out 8 in the win.  But it was the bat of Vicki Galindo that kept the Bandits afloat.  Galindo went 3-3 and scored 2 runs including the game winner in the top of the 8th on an Amber Patton base hit.

The 2 teams meet again on Sunday at 1pm in front of a national audience on ESPN2.  The Pride needs a win to keep their repeat hopes alive, “we just have an extra game to play now is all” said Pride outfielder Caitlin Lowe.  Should the Pride be victorious in game 2, they will force a deciding game 3 that will follow the 1pm game.

Don’t miss your chance to be on national TV, bring your signs to the ballpark and be a part of softball history on Sunday as a champion will be crowned.  Get your tickets at the gate or at www.profastpitch.com.  Students and military personnel get in free on Sunday with a valid ID.