Morgan Reigns Over Battle of the Bats 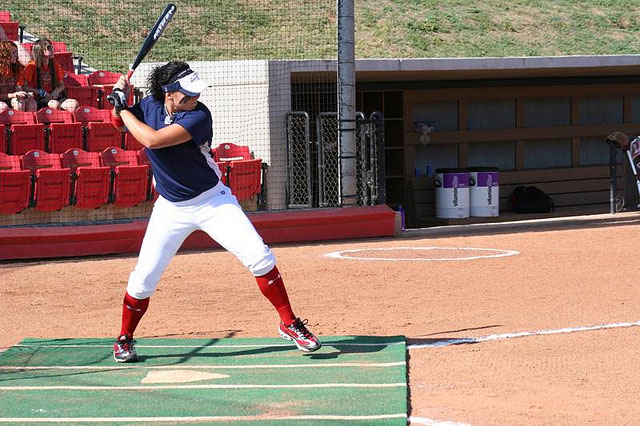 Sulphur, LA – The 2011 NPF Battle of the Bats Competition concluded Wednesday night at McMurry Park in Sulphur, Louisiana at Fan Fest of the National Pro Fast Pitch Championship Series, and the results were the same as last year’s competition.  The defending Battle of the Bats Champion, Charlotte Morgan of the USSSA Pride took home her 2nd B.O.B. title in as many years with a strong performance.  Morgan who led after the 1st round of the night with 6 home runs, turned in 4 in each the 2nd and Championship rounds to seal the deal.  Morgan, facing the Chicago Bandits Alisa Goler in the Championship round was down to her last swing, a home run wins it, and anything else takes it to a tie breaker.  Number 34 for the Pride delivered with a smash to repeat as the B.O.B. Champion.  Morgan also delivered the competitions longest bomb, a 333’ shot to left field.

The B.O.B. race was tight all season long and tonight was no different.  Regular season leader Dorian Shaw of the Chicago Bandits came in to Sulphur as the favorite pounding out 15 in the regular season.  Shaw failed to advance past tonight’s first round putting only 2 out of the yard.  Crowd favorite and the regular season runner-up Hoku Nohara of the Akron Racers who entered the night having hit 14 home runs advanced to the 2nd round after her 5 home run 1st round performance, but fell short of advancing to the Championship round having hit 4 in the 2nd.

Earlier in the evening 30 NPF players joined on the field with 19 Southwest Louisiana youth of the Awesome Kids Association in the Friends of the Pro’s Game.  The Awesome Kids Association offers sporting activities for physically challenged children and young adults and the NPF Friends of the Pros game proves to be the highlight of these children’s year.

The National Pro Fastpitch Championship Series begins on Thursday evening with Chicago Bandits facing the Akron Racers at 6pm, and the USSSA Pride does battle with the NPF Diamonds in the nightcap at 8:30.  Visit www.profastpitch.com for tickets.

Below is the round by round results from tonight’s Battle of the Bats competition:

MORGAN REIGNS OVER BATTLE OF THE BATS