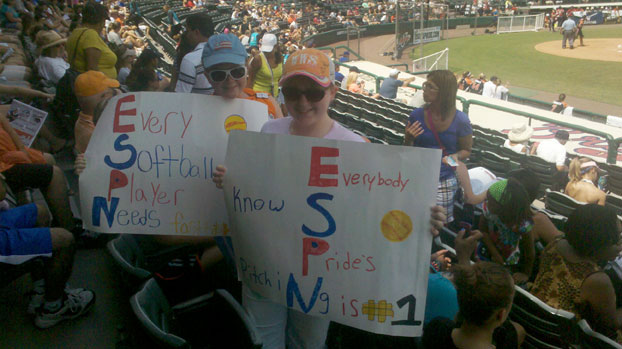 Orlando, FL—In the first game of a double header at ESPN Wide World of Sports, the USSSA Pride sent Cat Osterman to the mound to battle Chicago Bandits ace Monica Abbot to start the first of a 2 game contest was featured on ESPN 2 in front of a live audience of just under 4000 fans and hundreds of thousands viewing across the country from home.

It was a great choice as the USSSA Pride edged the Bandits in a 3-2 victory, a game that went 10 innings and instituted the international tie breaker. The second game was a different story as it that would feature all Chicago offense and bring them to their first win of the 2011 season, winning 3-0.

The contest remained quiet until the fourth when the Pride had runners on first and second in Jenn Salling and Andrea Duran. Salling was called upon to run for Kelly Kretschman who reached on a fielders choice earlier in the inning. Pride head coach then called upon Monica Abbot’s former Tennessee teammate Tonya Callahan to pinch hit for Megan Willis. The first two Pride runs then came on a 2 RBI single by Tonya Callahan to give the Pride a 2-0 lead through 4 innings.

The Pride had an opportunity to put more runs on the board in the 5th inning when they had the bases loaded with 1 out, but Monica Abbot managed to get a fielders choice and then followed it up with managing to get Pride first basemen Charlotte Morgan to fly out to right, stranding 3 runners and ending the inning.

The Bandits big inning came in the 6th when Jamee Juarez singled in Lexie Jager who had been brought in earlier in the inning to pinch run for. Shannon Doepking followed up immediately after with an RBI double to score Juarez, making it a tie ball game.
The Pride/ Bandits showcase on ESPN continued from that point on all the way to the 10th inning. At this point an international tiebreaker rule was put into effect so the Pride started with Natasha Watley on second base to start off the bottom of the 10th inning.