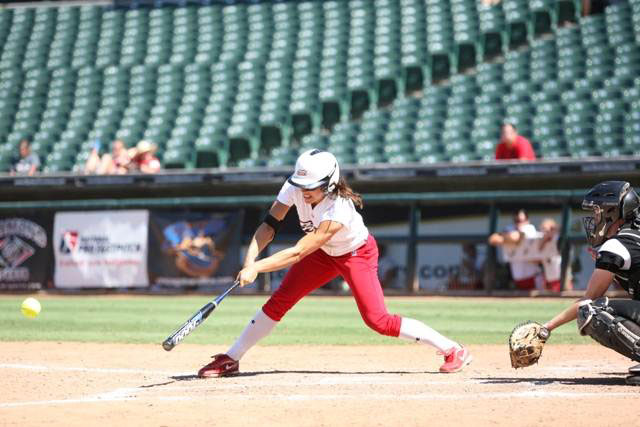 ROUND ROCK, Texas-Charging in from left field, Bandits’ left fielder Emily Friedman dove forward, snagging the ball just before it hit the ground, sending the Pride’s Natasha Watley back to the bench in the top of the first.

Unfortunately, Bandits’ pitcher Eileen Canney struggled against the next few batters, giving up back-to-back singles, and a two run RBI that blasted off the bat of Tonya Callahan. The Pride jumped on the scoreboard with a quick two-run lead on the Bandits in the first inning.

The Pride would not let up, taking the series finale by a score of 4-0, earning them the 3-2 series victory over Chicago.

The second inning did not fare much better for Canney as she gave up another run, which began with Canney plunking the Pride’s Francesca Enea.

Watley followed Enea by beating out the throw to first for a single. The Pride’s designated hitter Melissa Roth earned her first RBI on the day, as well as the Pride’s third run of the game, when Enea crossed the plate on Roth’s single to the left side of the field.

Bandits pitcher Kristina Thorson came in to relieve the struggling Canney after two innings of three run, five hit work for the Bandits.

Thorson managed to hold the Pride for two innings, keeping Florida scoreless until Mendoza led off the fifth inning with a triple to left field. She was brought in off the bat of Charlotte Morgan, who’s single dropped in just between Friedman in left field and Christine Knauer at shortstop.

After three innings of work, the rookie Nikki Nemitz quickly relieved Thorson in the sixth inning.

Nemitz performed great with a three up, three down inning, but was replaced by Jessica Sallinger in the seventh. Sallinger gave up one hit to begin the inning, but helped herself out by catching a line drive off the bat of Mendoza and throwing out Jessica Williams who was pinch running for Kelly Kretschman. Sallinger then forced Tonya Callahan to ground out and end the inning.

The Bandits came up scoreless in seven innings as Sarah Pauly and the Pride pitching staff continued to baffle the Bandits’ bats. This marks the second consecutive game, where the Bandits have failed to score any runs, despite multiple opportunities.

The Pride wins the series 3-2 after today’s win, but remain in second place in NPF standings behind the Bandits.

The Bandits have one home series left before playoffs begin for the League Championships. They will take on the Tennessee Diamonds at Judson University in Elgin, Ill. Thursday, August 19 through Sunday, August 22.