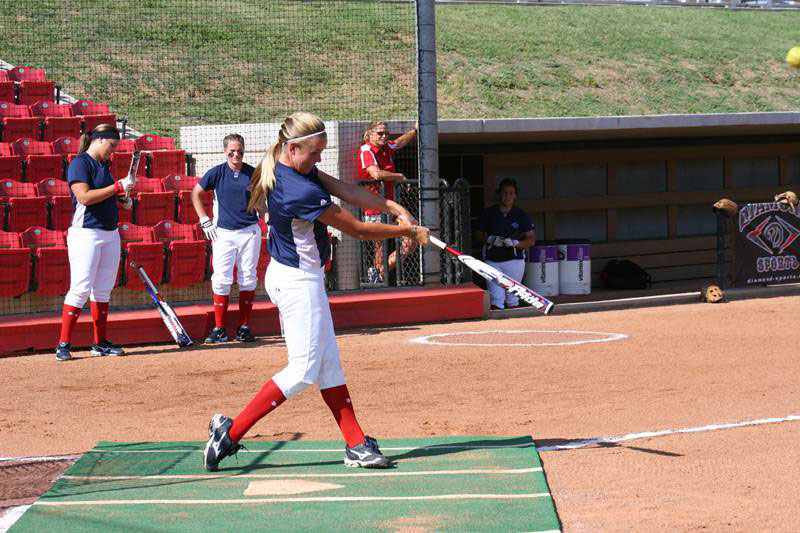 AKRON, Ohio (July 5, 2010) – The USSSA Pride came out swinging from the onset, clubbing 11 hits, including two homers en route to a 10-3 victory over the Akron Racers in today’s series finale at Firestone Stadium.
The Akron Racers (11-6) dropped just their second game of the series to the USSSA Pride (11-6) after earning the series win with a 6-3 decision on Saturday.

Starter Jamee Juarez (3-4) could not find her rhythm against the Pride as the visitors banged out 10 runs on 11 hits to tie the Racers atop the NPF standings. Conversely, Sarah Pauly (4-2) earned her second win of the series and moved through the Racers lineup with relative ease, giving up three runs–just one earned, on four scattered hits while striking out five. Pauly did not issue a walk in seven complete frames.

In the top half of the opening stanza, the Pride caught the Racers’ defense off guard, dropping down a suicide-squeeze bunt to move in front 1-0. Megan Willis put the visitors ahead in convincing fashion, when she drove a grand slam home run over the left field fence to extend the lead to 5-0.

The Racers made a run of things in the home half of the second when Trena Peel collected a RBI single to plate Juarez, who led off with a single. Two outs later, Jackie Pasquerella hustled on a misfielded ball by Pride third baseman Andrea Duran, which enabled Samantha Ricketts to score. Lisa Modglin then roped a single to left, driving in Peel to make it a 5-3 affair. Unfortunately for the Racers, the offensive output would end there, while the Pride capped off the day by scoring five additional runs.

In third, Kelly Kretschman’s RBI double plated Jessica Mendoza who registered a lead-off walk.
The Pride tallied two more runs in the fourth, with two outs as Kretschman delivered for her team once more, driving in Natasha Watley and Melissa Roth who each singled, giving the visitors an 8-3 advantage.

The Pride pounded the final nail in the coffin atop the seventh on Duran’s two-out two-run home run to left that barely hung inside the foul pole, accounting for today’s final, 10-3.
Akron travels to Chicago July 8th for a four game series against the Bandits before returning to Firestone Stadium, July 14th for their final five-game homestand against the USSSA Pride. For more information or tickets, please visit www.akronracers.org.