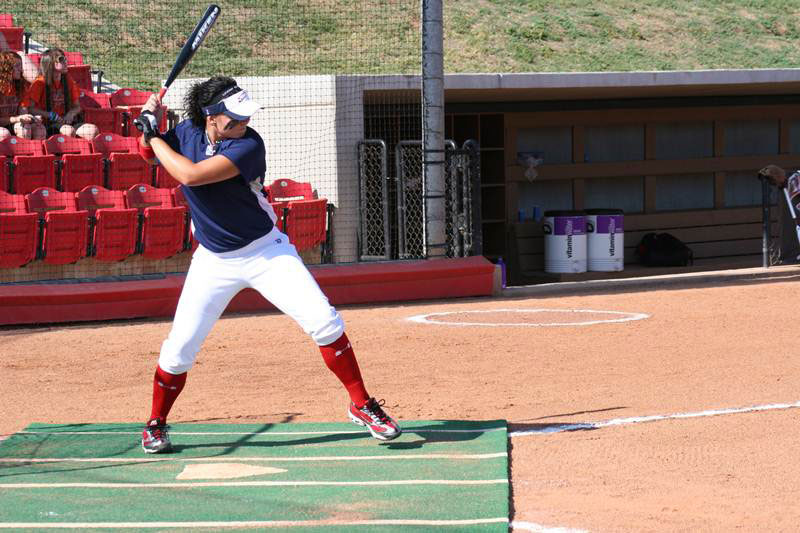 Orlando, Fla. – After falling to the Canadian National Team in the seventh inning of last night’s game, The USSSA Florida Pride took to the field once again at ESPN’s Wide World of Sports for the second game of the three game series.
Katie Burkhart, in her first start in the circle for the Pride, allowed six runs on eleven hits but secured the win tonight pitching eight strike-outs and allowing only two walks.

Leading off the contest for the Canadian National Team was Melanie Matthews, who, after only two pitches, ripped the first home run of the game past the right field fence. Centerfielder Caitlin Lever followed with a lazy infield pop-fly which bounced into the glove of shortstop Kristin Schnake. A quick throw to Charlotte Morgan at first completed the put-out, which was followed by the first strikeout of the contest on Jennifer Yee. A single from Sheena Lawrick marked the second base hit for the visiting team, but Burkhart’s second strikeout of the inning on Jennifer Salling marked the third out and left Lawrick stranded at the conclusion of the first.
Back to back hits in the bottom of the first for the Pride allowed the team to tie with a single run scored. Leading off at the plate was Melissa Roth, who laced a triple to right field and scored on an RBI single from shortstop Kristin Schnake. A walk from Amber Flores put the Pride on base again, but a pop-out to short from Francesca Enea quickly marked the end of the inning.

Canada saw their second run of the game from Kaleigh Rafter, who led off the top of the second. A single from Corrine Doornberg put Rafter in scoring position on second when the scoring double was made by Matthews. A quick third out led to the top of the third.

The visiting team secured themselves a lead in the top of the fourth with three runs being scored off of two hits and an error from Charlotte Morgan at first, allowing Matthews to reach on a missed throw from Tonya Callahan at third. Matthews advanced to scoring position on second with a stolen base during Lever’s at-bat, and Lever’s subsequent single drove her home. Up next at the plate was Yee, who came into the contest batting .400 for the series. A two RBI home run from the second base player drove in the final two runs of the inning and put Canada ahead by four in the middle of the fourth.

Leading off for the Pride in the bottom of the inning was rookie Amber Flores, who reached on a walk, her second of the night. A 5-4 fielder’s choice allowed Enea to reach, and she was advanced to scoring position on second on a walk from Callahan. Morgan came to the plate next and ripped a two RBI double on the first pitch of her at bat. Two consecutive walks off of pitcher Ashley Lanz, and a third from relief pitcher Tina Andreana left the bases loaded when designated player Stephanie Best stepped to the plate. A single from Best drove in both Roth and Enea, but a diving play from Lever to catch a line drive from Flores retired the inning with the Pride leading by one.
The tying run was scored by Canada in the top of the fifth by Evelyne Pare, pinch running for Rafter, whose single accounted for one of the three hits in the inning.

The Pride quickly stole ahead again however in the bottom of the fifth, scoring four runs on three hits. Two walks from Enea and Callahan led off the inning and a subsequent single from Morgan drove Enea to the plate, marking Morgan’s third RBI of the contest. A single from Williams, followed by a sacrifice fly from Schnake, allowed Callahan to score. Kretschman came to the plate next, driving the ball right on the inside of the third base line, recording a double and driving in two more runs from Morgan and Williams. The Pride concluded the fifth, up again with a four run lead.
Burkhart was able to hold the Canadian National Team at six runs throughout the sixth and seventh innings, facing only seven batters across the two, and securing the Pride’s 10-6 victory.

With the win tonight, The USSSA Florida Pride has tied the series. The two teams will take to the field tomorrow night at 7:05 pm EST for the third and deciding contest of the exhibition slate.