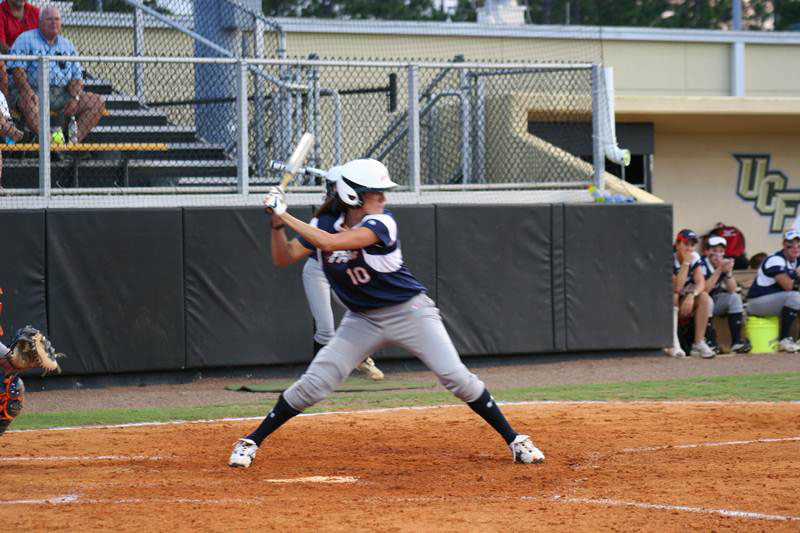 Orlando, Fla. – The last time the USSSA Florida Pride stepped onto the field for an exhibition series, they swept the Venezuela National Team in a five game series held at the UCF Softball Field, beginning June 31 and going through the weekend of June 3-6. With a fourteen strike-out game pitched by Cat Osterman, and two home-runs by Stephanie Best, the second of which was a grand slam, the Pride proved their prowess on an international level.

Today, they set out to do that again, taking on the Canadian National team for the first contest of a three game series held at ESPN’s Wide World of Sports. A valiant effort was made, and the game remained close throughout, with a score tied at 5-5 at the top of the seventh inning. However, the visiting team rallied for the win and the game concluded with the Pride at nine runs, and Team Canada with 13.

Starting in the circle for the Pride was Sarah Pauly, coming into the series with a 0.00 exhibition ERA and a 4.50 ERA for the regular season. Opposite her in the circle, starting for Canada was Jenna Caira.

Canada started their run for the win early, when Jennifer Yee made it to base on an error from Pauly. She was followed at the plate by Sheena Lawrick, whose subsequent double drove her home, scoring the first run for Canada. A third strikeout from Pauly on Jennifer Salling ended the inning with Canada taking the first lead.

Canada continued their early lead in the top of the third when they saw two more runners advance to the plate. After reaching on a fielder’s choice, Yee advanced to scoring position on second off of a single from Lawrick. Salling came to the plate next, and advanced to first on a ball, leaving the bases loaded when Kaleigh Rafter stepped up to bat. A pass ball drove Yee home and advanced both Lawrick and Salling, giving Canada multiple scoring opportunities in the middle of the inning. A wild pitch allowed Lawrick to score the second run of the inning, advancing Salling to third and Rafter to first, but a strikeout from Jillian Russell left the pair stranded at the close of the third

The top of the fourth saw the fourth run scored for the visiting team from Corrine Doornberg, pinch running for Erin Cumpster, on an RBI single from Yee.

The Pride rallied in the bottom of the fifth, tying up the score at 4-4 at the close of the inning. Rookie Francesca Enea, in her first game with the Pride and second inning at bat, was hit by a pitch to make it on base. After a ground-out to second from Jessica Williams, Melissa Roth became the second in the Pride line-up to make it on base after being hit by relief pitcher Ashley Lanz. A pass ball followed by a wild pitch during right fielder Kelly Kretschman’s at-bat brought Enea home and her subsequent RBI double drew another run for the Pride from Roth. A double from Stephanie Best, pinch hitting for Tonya Callahan, drove in a run from Kretschman, and a subsequent ground rule double from Amber Flores allowed Best to score the fourth run.

Each team scored a run each in the sixth inning, from Cumpster on the visiting line-up and Roth of the Pride, with the score remaining tied at the top of the seventh. It was the Canadian National team however, that stole away with the lead in the top of the seventh. Eight runs off of eight hits, including a two RBI double from Yee, allowed the visiting team to securely plant themselves in a winning position. Three strike-outs off of relief pitcher Desiree Serrano, who allowed four of the eight hits, concluded the inning.

The Pride made a strong come-back effort in the bottom of the seventh, scoring four runs off of three hits, including a two RBI triple from Roth. A subsequent single from Schnake drove Roth home, and after a walk Kretschman, and an RBI single from Callahan, the Pride looked poised to score again, with runners in the corners when Amber Flores took to the plate. A ground ball to the pitcher left the runners stranded however and concluded the game, with the victory going to the visiting team.

The USSSA Florida Pride will take to the field against the Canadian National team once again tomorrow night at 7:05 pm at ESPN’s Wide World of Sports.