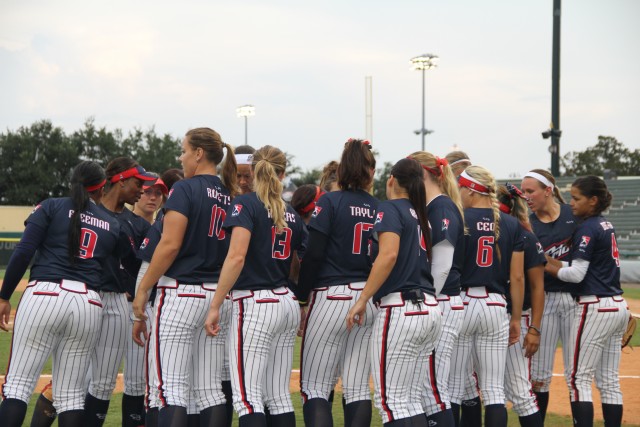 Jordan Taylor improves to 9 saves on the season. Photo by Kit Mohr

Kissimmee, FL – July 16th-Chicago (22-10) scored in the first and last innings but the night belonged to the USSSA Pride (22-8) as they defeated the Bandits 6-5 Thursday evening at Champion Stadium.

Both teams started off the night swinging the bat well, as each team scored in the first frame. Chicago’s Amber Patton singled to left and two batters later Taylor Edwards gave the Bandits the 2-0 lead by bending her team-leading fifth home run of the season around the left field foul pole. The Pride got one run back in the bottom of the inning as Natasha Watley singled to lead off the inning and Brigette Del Ponte doubled her home with a one-hopper off of the center field fence.

Chicago used three pitchers in relief of Verdun in the third inning as the Pride sent nine batters to the plate, scoring four times. Pitchers Tatum Edwards (L, 3-3) and Sara Moulton each issued an RBI walk and Megan Gascoigne allowed a two-run pinch-hit single to Lauren Chamberlain before recording the final out of the frame.

The Pride added an important insurance run in the fourth on Megan Wiggins’ RBI double to the left center, scoring Watley and pushing the score to 6-2.

Chicago mounted a comeback in the seventh inning pulling to within a run after Tammy Williams’ three-run home run with two outs before Jordan Taylor (S, 9) struck out Edwards to end the game at 6-5 and notch her ninth save of the season.

The Pride’s Cat Osterman (W, 9-2) picks up the victory after tossing five innings of three-hit softball. She struck out five on the night. Kirsten Verdun started the game and allowed a pair of runs on two hits in two-plus innings before making way for Tatum Edwards.

The Pride will be back in action Saturday at Champion Stadium when they will host the Pennsylvania Rebellion. The game is set for a 8:00 p.m. start.