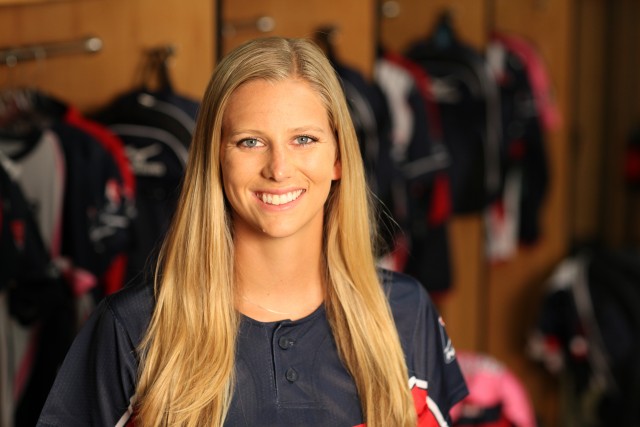 Shipman (2-4, 1 Run, 4 RBI) changed the game in the top of the seventh inning with a two-run home run to left field that scored pinch runner Courtney Ceo to tie the game 4-4.  After the Racers were quietly set down by Pride closing pitcher Jordan Taylor (2-1) in the bottom of the seventh inning, the table was set for Shipman again in the top of the eighth.  With pinch hitter Amanda Kamekona and pinch runner Breja’e Washington on second and third base respectively, Shipman blasted a line drive over Racer left fielder Sonoka Kuniyoshi for a two RBI double to put the Pride on top 6-4.

Akron made some noise in the bottom of the eighth inning and almost tied the game again.  With two outs and right fielder Ayumi Karino on first base, Briana Hamilton stepped to the plate and drove a deep fly ball to right field that Pride right fielder Kelly Kretschman caught just in front of the fence, just short of a two-run home run.

The ending highlighted what was a back and forth battle all night, with three lead changes and two ties throughout eight innings of play.

Kretschman (2-5, 1 Run, 1 RBI) opened the game with a home run to give the Pride a 1-0 lead in the top of the first inning. This was Kretschman’s fifth homerun of the season.

The Pride and Akron would trade runs in the sixth inning to keep the Racers ahead 4-2 entering the seventh inning.

Jordan Taylor was awarded the win after throwing the final 2.2 innings of relief for Andi Williamson who entered in the bottom of the fifth for starter Hannah Rogers.

Akron Racers’ General Manager Joey Arrietta opened the game with a dedication to Cat Osterman, the two-time Olympic medalist and eight-season NPF veteran, who played her final game at Firestone Stadium last night before her retirement that will follow this season.

The Pride head to Pennsylvania to take on the Rebellion tonight, Friday July, 10th, for a three-game set at CONSOL –Energy Park in Washington, PA.