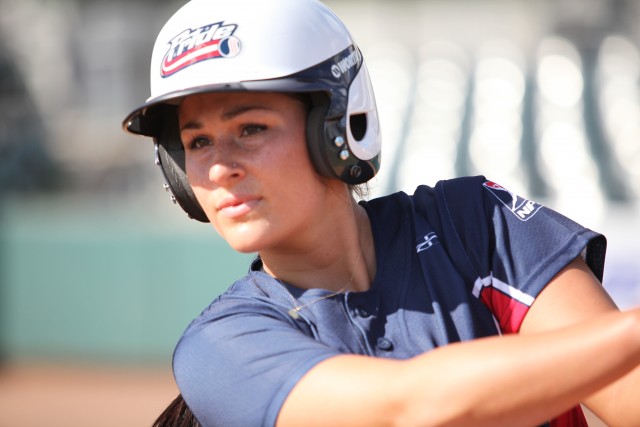 In game one, the Pride capitalized on a big Racers error by scoring two runs off a Megan Wiggins (1-3, 1 run, 1 RBI) double to left field in the first inning.  They led 2-0 until the Racers’ bats would string together a couple hits in the third allowing them to scratch a run making it 2-1.  The Racers altered the scoreboard again in the fourth on a Kelly Montalvo solo shot over the center field fence that would tie the game at 2.

The Pride answered back in the 5th with a two out, RBI double to right center off the bat of Kelly Kretschman (2-2, 1 RBI).  Natasha Watley (2-4, 2 runs) scored the go ahead run after previously singling to center field.

Once again, the Racers would answer back in the same inning.  Nerissa Myers doubled to left field and Taylor Schlopy followed with a homer over the fence in right field giving the Racers a 4-3 lead.

Sarah Pauly retired the Pride bats in order in the top of the 6th,  bringing the Racers’ bats to the plate once again.  Nerissa Myers singled to right field to score Barrett, adding another un-earned run for the Racers, 5-3: A lead the Pride wouldn’t recover from.

But Shelby Pendley (1-1, 1 run, 1 RBI) and the Pride wouldn’t go down without a fight.  Pendley’s lead off solo shot over the right field fence moved the Pride within 1, but that would be all they could manage as the Racers’ defense behind Pauly retired Madison Shipman, Chelsea Goodacre and  Natasha Watley in order.

In game two, after three scoreless innings on both ends, the Pride came out with a bang in the top of the 4th.  The former Oklahoma power duo, Shelby Pendley (2-3, 1 HR, 1 RBI) and Lauren Chamberlain (3-4, 1 HR, 1RBI) both homered to give the Pride a 2-0 lead.  It was Pendley’s second homer of the day and both her and Chamberlain’s third of the season. Madison Shipman (1-4) followed suit and singled with one out but Fico was able to get herself out of the inning still trailing by two. It seemed the former Sooners were making all the key plays in the 4th. Keilani Ricketts (3-1)  following an unfortunate hit by pitch to start the inning, struck out the next three batters in order to end the 4th.

Two runs wasn’t enough for the Pride offense.  Kretschman advanced to second on a throwing error by the Racers’ third baseman to start the 5th.  Wiggins followed with a sac fly to right field that was deep enough for Kretschman to tag for third.  Brigette Del Ponte (1-4, 1 RBI) grounded out to shortstop for the second out, but earned herself an RBI to put the Pride up 3-0.

In the 6th, Lauren Chamberlain started things off with a single to center field.  Following a Shipman line out, Amber Freeman (1-1, 2B, 1 RBI) entered to pinch hit for Megan Willis. Freeman earned her first RBI double of the season scoring Chamberlain for the fourth Pride run of the game. Quickly after, NPF veteran Natasha Watley (2-4, 1 RBI), added her first triple of the season to put the Pride up 5-0 to start the 7th.

In the final inning of game-two against the Racers, despite loading the bases with no outs, the Pride left three runners on and could not score in the 7th. The Racers on the other hand, would not stop the fight and a Robinson solo homerun put the Akron Racers on the board. The next three batters were stopped by Keilani Ricketts who pitched seven full innings and totaled 7 strikeouts, allowing only two hits. Rachele Fico took the loss for the Racers.

The USSSA Pride will take on the Akron Racers for the final game of the series tonight, July 9th at 7:05 PM (ET). Will the Racers force the series split or will your Pride improve to 3-1 and take the series win. Tune in tonight to find out!