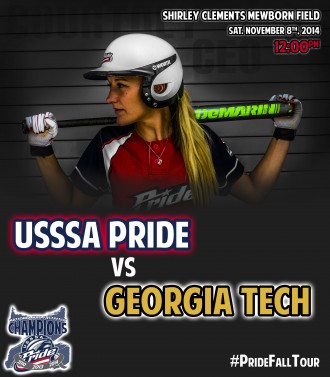 Kristyn Sandberg and the Pride dropped an 8-7 decision to UGA Thursday. Photo courtesy of UGA Athletics

Kissimmee, FL-November 8, 2014-Saturday afternoon the USSSA Florida Pride face off against Georgia Tech at Shirley Clements Mewborn Field in Atlanta. First pitch is set for 12:00 PM (ET) between the Pride and Yellow Jackets. The Pride dropped an 8-7 decision to the University of Georgia on Thursday in Athens. Following their game against Georgia Tech, the Pride will play an exhibition game with players participating in the USA Elite Select Showcase at 8:00 PM (ET) at Central Park in Cumming, GA. Then, the Pride play an additional All-Star exhibition game Sunday evening with the top high school fastpitch players from the state of Georgia.

The five-time ACC Champion Yellow Jackets have a rich history of NPF players including current assistant coach Charlotte Morgan, who was the Pride’s number one overall pick in 2010 and played with the Pride from 2010-2012.

“I think its great that the Pride are playing different colleges around the country because it brings awareness of the NPF to people do not know there’s a pro league for softball and it helps grow our sport. It also opens the eyes of the current college players that they could continue to play after college if they really wanted to,” said current Georgia Tech assistant coach and NPF veteran Morgan.

Following Georgia Tech, the remaining games on the Fall Tour include:

This marks the second consecutive year the Pride have featured a Fall Tour with exhibition games against college teams. Additionally, USSSA helped sponsor the NPF Back-to-School Tour from 2010-2012 where players from all NPF teams traveled across the country taking on various college programs. The Fall Tour offers the USSSA Pride and the NPF a chance to play in front of crowds who may not have been previously exposed to professional softball. It also offers future and current stars of the game to come together in dynamic college atmospheres as well as the local communities.