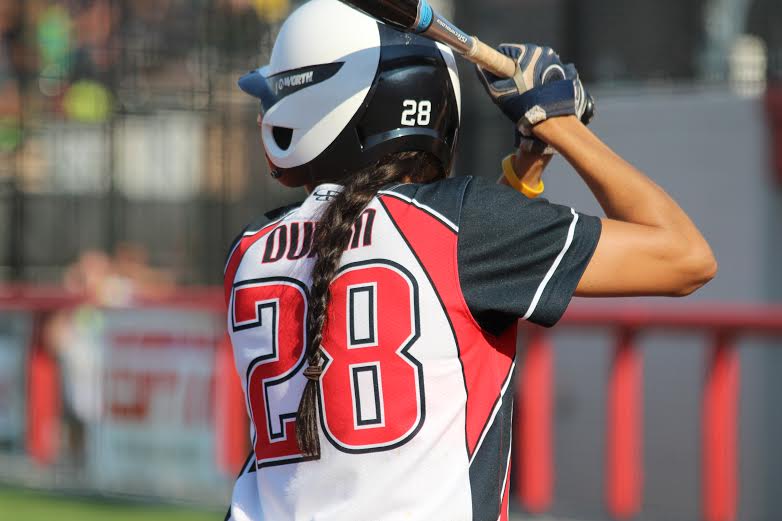 Kissimmee, FL-July 25, 2014– The USSSA Florida Pride used an impressive offensive performance to beat the Akron Racers 12-2 Friday night at ESPN Wide World of Sport Complex in Kissimmee, FL. Even two weather delays and a shift to the  starting lineup could not slow down the offense as the Pride put up 12 runs on 17 hits.

“This team never stops amazing me. It doesn’t matter who we have in the line up, they find a way to get the job done,” said winning pitcher Cat Osterman.

After the start time was delayed due to lightning, the Pride took an early 1-0 lead with a RBI single by GiOnna DiSalvatore in the bottom of the first. Mother nature struck again after the first inning delaying the game for over 30 minutes. When the game resumed, the Racers took a 2-1 lead in the top of the second after a Nerissa Myers single to right field scored Kelly Montalvo and Ayumi Karino.

It did not take long for the Pride offense to respond. Alexa Peterson led off the bottom of the second with a single to left and advanced to third after her ball was misplayed by the left fielder. Natasha Watley’s single to center field tied the game at 2-2. After a Caitlin Lowe single loaded the bases, Madison Shipman lined a bases-clearing double to center field to put the Pride up 5-2. Two batters later Brigette Del Ponte laced a double to right field to score Shipman and put the Pride up 6-2.

The Pride added two runs in the bottom of the third when Duran hit a two-run single to center field scoring Watley and Lowe who had each singled. The final three Pride runs came courtesy of a bases-clearing double by pinch hitter Amanda Kamekona in the fourth. Six Pride hitters ended the day with multiple hits. Peterson and Duran led the way with three hits a piece. Shipman, Duran, and Kamekona each had three RBIs on the day.

Osterman (12-0) picked up her 12th consecutive win of the season after going four innings and allowing two earned runs on three hits. Blaire Luna pitched three scoreless innings in relief allowing no hits and striking out four. Hannah Campbell suffered the loss Akron after allowing 12 hits and 5 earned runs in 4.2 innings. The Pride extended their win streak to five games with the win.

The Pride and Racers return to action for a doubleheader on Saturday, July 26 at 5:30 and 7:35 PM EDT at ESPN Wide World of Sports. For tickets visit www.dev.usssapride.com or purchase tickets at the gate. The game will be live streamed on www.usssalive.com/usssapride.

The United States Specialty Sports Association (USSSA), headquartered in Osceola County, Florida, USSSA is the World’s Largest Multi-sport Athletic Organization. Founded in 1968, USSSA has grown to over 3.7 million participants, competing in 13 nationally sanctioned sports including Baseball, Fastpitch, Slow Pitch, Karate, Basketball, Soccer and more! For more information on USSSA and to register your team visit USSSA.com. Also be sure to visit USSSAToday.com for the latest USSSA.