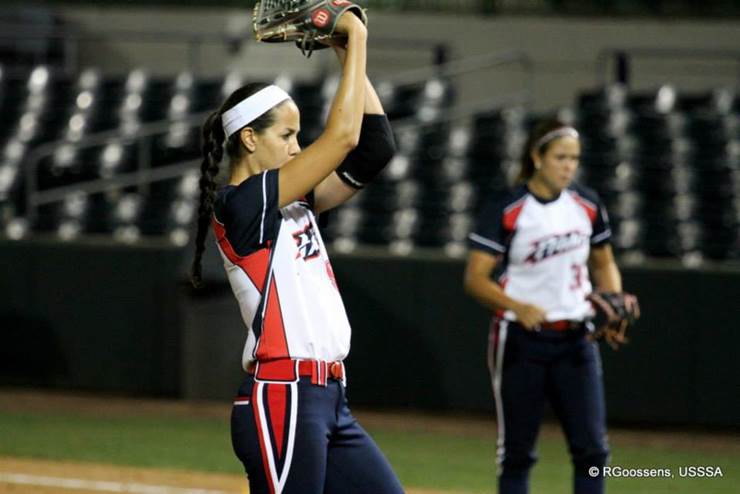 Corpus Christi, TX- With 2,828 fans in attendance at Whataburger Park in Corpus Christi, Texas Friday night, Cat Osterman lead the USSSA Pride to a well-earned 13-2 win in the second game of a four-game series against the Akron Racers.

Osterman struck out 12 Racers hitters in six innings, making Thursday’s game her third straight start with ten or more strikeouts. She allowed only three hits for the night, two of which were to former Pride player Charlotte Morgan, including a solo homerun in the fourth. Her third-inning hit to Ayumi Karino in the third was the first hit Osterman gave up in more than 11 innings since opening night on June 9.

The Pride continued to dominate offensively. Their 13 runs came on 16 hits. Akron starting pitcher Erin Arevalo struggled against Pride hitters, allowing eight runs on as many hits, before Jen Mineau was brought in for relief in the second inning. Exceptional offensive performances came from GiOnna DiSalvatore (2-3) with three RBIs and Francesca Enea (3-4), who scored on a wild pitch in the second.

Rookie Jessica Shults earned her first NPF homerun in the fifth inning, sending a bomb over the center field fence to extend the Pride’s lead to 11. Fellow rookie Blaire Luna made her second relief appearance in the seventh, retiring three straight batters to end the game, a much better performance than the previous night’s outing.

The Pride close out the series with the Racers in a double header Saturday at 3:30 p.m. and 5:30 p.m. EST. Tune in to ESPN3 or the WatchESPN app for live coverage.