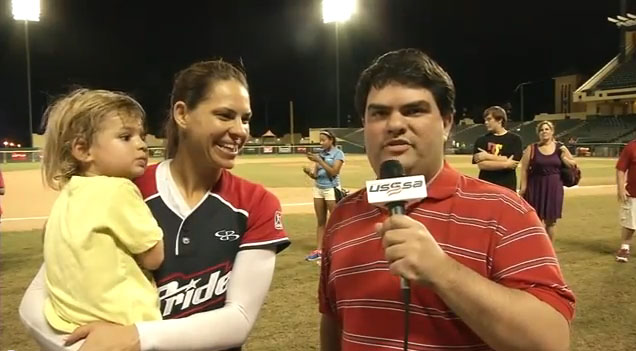 That’s right Pride fans, star fastpitch player, Jessica Mendoza, who was interviewed after the game on Sunday July 29th by ESPN Radio’s Eric Lopez and is to be interviewed again this Thursday August 2nd on the David Baumann Show broadcast on Central Florida’s 1080AM ESPN Radio.

Jessica will be on air around 10:05am on Thursday August 2nd just after National Sports Center at 10am. Jessica is to talk about the USSSA Pride, the National Pro Fastpitch league as well as her broadcasting experience on ESPN. Jessica, as with many of the professional Fastpitch players is passionate about getting Softball back to the Summer Olympics.

For those who can’t listen on the radio, they can listen live to 1080AM ESPN Radio right here online!