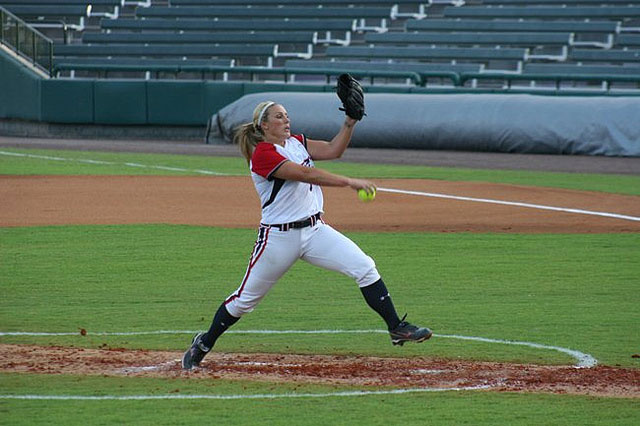 The Pride jumped onto the scoreboard in the top of the first inning when Caitlin Lowe reached on a fielding error, Alissa Haber walked, Charlotte Morgan singled for a run battted in, Francesca Enea walked, Ashley Charters collected a sacrifice fly, Andrea Duran doubled in two, Lauren Lappin singled, Canadian Olympian Jenn Salling singled in two, and Natasha Watley knocked in one with a base hit for a 7-0 lead.

The Diamonds got onto the scoreboard in the second frame as Jami Lobpries walked and Brittany McKinney hit a two-run home run for a 7-2 score.

In the fifth the Pride scored again with four runs for a 11-2 advantage when Morgan hit a solo home run, Enea singled, Charters hit a two-run home run, Duran doubled, and Watley singled for a RBI.

The Diamonds got two runs back in the bottom of the fifth inning as McKinney hit her second home run of the night and Bianca Mejia also hit a solo home run for a 11-4 score.

The Pride increased their lead in the seventh frame when Duran singled, Lappin doubled, Salling and Watley singled in one each, Lowe walked to load the bases, Kelley Kretschman cleared the bases with a three-run double, and Kretschman scored on a throwing error for a 17-4 lead.

Game three of this Women’s Pro Fastpitch series between the USSSA Florida Pride and the NPF Tennessee Diamonds will be on Thursday August 4th at 6:30 at Foothills Stadium. Tickets are $16 for the Lower Bowl and $12 for the Upper Bowl. Tickets are available at 2255 Crowchild Trail Northwest or www.calgaryvipers.com.