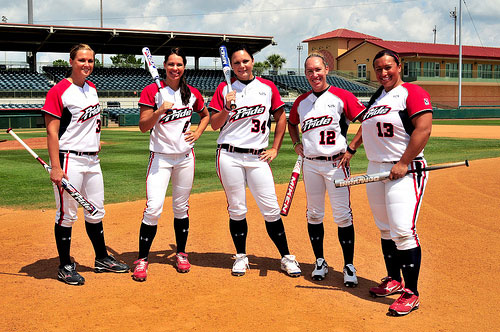 Kissimmee, Fl– Danielle Lawrie pitched a gem in route to her 7th victory of the 2011 NPF season in a 15-3 victory over the Chicago Bandits on Saturday afternoon. Lawrie would go on to strike out 10 batters, surrendering 3 runs on 6 hits in her solid outing. Danielle Bourgeois would suffer her first lost of the season, giving up eleven runs on seven hits, while walking four and striking out none. Jamee Juarez would come in in relief in the third inning but it was too late as the runs kept coming, giving the USSSA Pride their 17th victory of the year.

The Pride came out swinging in the first inning, scoring 5 runs in the bottom half of the inning, and continuing to lay it on throughout the course of the game. Natasha Watley continued to show why she is the NPF’s leading hitter as she went 3-3 on the day with a walk and four runs scored. Kelly Kretschman’s bat continued to heat up in this contest, as it has in the second half of this 2011 season, going 3-3 with a run batted in.

Tammy Williams would be the lone bright spot for the Bandits, going 3-3 with an RBI. Danielle Zymkowitz would also have a solid showing at the plate going 2-4 with a run scored. The Bandits offense would put up three runs in the game but the bats of the Pride in the end would never give them a chance as the Pride would go on to win 15-3 in a lopsided victory.

In the second game of the night, the USSSA Pride sent Sarah Pauly to the mound to battle the Chicago Bandits ace and NPF wins leader, Monica Abbott.

The contest remained a pitchers duel for the entirety of the game. In the top of the second Megan Wiggins advanced to second on a single by Shannon Doepking but that wouldn’t be able to capitalize as Sarah Pauly struck out Dorian Shaw to end the scoring threat.

The Pride would end Monica Abbott’s no hitter in the bottom of the sixth when Caitlin Lowe would drop a single over the head of Bandits third baseman Amber Patton. Melissa Roth would follow it up with a perfectly placed sacrifice bunt, pushing Lowe over to second. But Abbott would shut down the Pride’s hopes of breaking the scoreless game, by getting Samantha Findlay and Natasha Watley to line out to finish the sixth.

Some spectacular pitching by Monica Abbott and solid defense by the Pride would take the scoreless contest into extra innings. In the bottom of the eighth the Pride threatened again when Francesca Enea would be hit by a pitch, followed closely by a bunt single by Caitlin Lowe which put Enea into scoring position. Once again, Abbott would would stop the Pride by striking out Melissa Roth and Jenn Salling to end the eighth.

The Bandits would lead off the ninth inning with a single by Caitlin Lever which would bring coach Tim Walton to the pitchers circle to bring Cat Osterman in in relief. Osterman would strike out the side to end the inning. The Pride would once again fail to score sending the game to the tenth inning, where the international tiebreak rule would be in effect.

The Pride and Bandits had a number of opportunities to score in extra innings, but the pitchers continued to be the heroes in this game. The Pride would step up in the 12th inning when, with Watley on second, Ashley Charters sacrificed Watley over to third bringing up Jessica Mendoza who would hit a hard line drive to centerfield and off the glove of a diving Caitlin Lever, which would score Watley. The Pride would enjoy their second walk off win in three games.

Monica Abbott would get the loss, but would pitch a brilliant game, tossing 11 1/3 innings, striking out thirteen, walking one, and of course giving up one run which would be the game winner. Sarah Pauly would also pitch a spectacular game for the Pride, giving up 4 hits while striking out eight. Cat Osterman would come in in relief and like her teammate, hold the Bandits to no runs while striking out 6 batters in four innings of work.

The USSSA Pride will face off in the series final against the Chicago Bandits at ESPN Wide World of Sports on Sunday at 12PM. Come out and support your favorite NPF Team. For more information visit dev.usssapride.com.

Pride VS. Bandits Rained Out on Friday Night
Pride Sweep Bandits at Home, Win in Finale 6-2