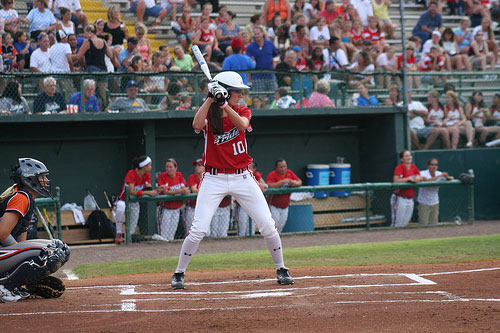 Kissimmee, Fl- Cat Osterman would pitch a masterful performance in Thursday nights 3-1 win over the Chicago Bandits. Osterman would go on to strike out 14 batters in her 8th win of the season in Game 1 of this final series of the season at home against the Bandits. Nikki Nemitz would suffer a no decision, giving up one run while striking out one. The loss would go to Monica Abbott who came in in relief in a 1-1 tie ball game, only to give up a game winning two run home run to Francesca Enea in the bottom of the eighth.

The first inning started off slow with both sides being retired in order.

Chicago came out fast in the second inning with Alisa Goler starting things off with a double. Tammy Williams followed in up with a walk, then Alisa Goler was brought in to score by consecutive singles by Shannon Doepking and Caitlin Lever, making in 1-0 Bandits. The Pride would come to the plate in the bottom of the second but couldn’t capitalize on a single by Fracesca Enea and a walk by Kelly Kretschman, leaving the score 1-0 after 2 innings.

In the 3rd inning the Bandits were retired in order. the Pride would have an opportunity to score in the bottom of the 3rd with Natasha Watley on third and Caitlin Lowe on second in scoring position, both reaching on singles earlier in the inning but in the end couldn’t capitalize, as Andrea Duran popped out to end the inning.

Cat Osterman started in the top of the fourth right where she left off, getting her seventh and eighth strikeouts while retiring the Bandits hitters in order. After two hits by Charters and Enea, Nicki Nemitz managed to retire the next three Pride batters to get out of a huge jam in the bottom of the fourth.

The Pride again would start the bottom of the inning with a single by Natasha Watley, and would get pushed to third by a few infield groundouts by Lowe and Mendoza. Nicki Nemitz would once again get herself out of a threatening jam with a runner in scoring position by making all three put-outs herself.

Osterman would continue her masterful performance into the top of the sixth as she picker up her 10th strikeout of the game while retiring the side in order. The hits would keep coming from the Pride to start the inning with leadoff singles by Ashley Charters and a pinch hitting Melissa Roth. Kelly Kretschman would come up and sacrifice bunt the runners into scoring position. Alissa Haber then hit a sacrifice fly to left to score Charters from third.

The Bandits and Pride would both strand runners in scoring position in the seventh as both teams failed to score, heading into extra innings.

In the 8th inning, Osterman would again pad her strikeout stats by striking out the side, once again giving the offense a chance to win the game, and it would be a much needed chance.

The game would end in stellar fashion as Francesca Enea would take a 2-2 pitch deep over the centerfield fence off Monica Abbott, giving the Pride a 3-1 walk off victory in front of a huge crowd at ESPN Stadium.

The USSSA Pride will face off in Game 2 against the Chicago Bandits at ESPN Wide World of Sports on Friday at 7:05. Come out and support your favorite NPF Team. For more information visit dev.usssapride.com.