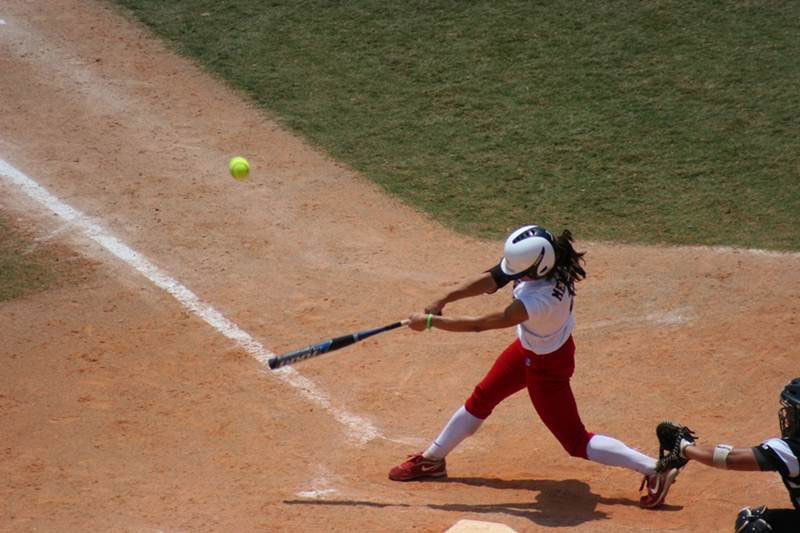 Akron, OH- USSSA Pride’s outfielder Jessica Mendoza classifies herself and her teammates as perfectionists. After trailing 4-3 after six innings and making three costly errors, the Pride (8-7) were not meeting that standard, but rallied for four runs in the sixth to take two of the first three contests over the Racers, 7-4.

With the win tonight, the Pride move back into a second-place tie with the Racers (8-7). Mendoza, the league’s leading hitter at .413, including three home runs and 12 runs batted in, went 2-for-3 with a solo home run, two RBI’s and two runs scored. When the sixth inning rolled around, she knew her team had to kick it up a notch to pull out a victory.

“We’re perfectionists,” she said. “We expect to be good all the time. We just had to loosen up [in the sixth] and take a different perspective. I mean, you just look at all the people in the crowd and realize you’re playing professional softball for a living- it doesn’t get much better than that.”

After falling behind 4-1 in the fourth inning, the Pride slowly chipped away at the Racers lead. Natasha Watley tripled to left center to lead off the inning, and scored on Alissa Haber’s sacrifice fly to left to make it 4-2. A Morgan Childers throwing error on a Mendoza ground ball allowed her to advance to third and eventually score on a Charlotte Morgan line drive single over head of Jessica Williams at second to cut the deficit to a run at 4-3.

The bottom would fall out for the Racers in the sixth inning. Ashley Charters doubled to left to set the table for an Andrea Duran single up middle. Duran advanced to second on the throw home from Lisa Modglin. Two batters later, Natasha Watley connected on a line drive single to center, plating Ashley Charters to tie the game at 4-4. After Watley stole second, Alissa Haber singled to left, bringing home Andrea Duran to put the Pride ahead 5-4. Mendoza’s sacrifice fly and Morgan’s single tacked on two more to close out the inning at 7-4.

The Racers know they let one slip away and field manager Jake Schumann realizes that the team has to correct their defensive mistakes. “Morgan [Childers] did a great job, we just threw the ball away,” Schumann said. “[Kristina] Thor said she was ready to come in and pitch in relief and then the wheels came off.”

Childers (2-2) threw 5 1/3 innings, 4 1/3 to start, before coming back in to close out the seventh. She allowed three runs (two earned) seven hits and fanned two. Schumann didn’t feel like he left Childers in too long before the Racers surrendered the lead in the sixth. “She pitched well and you have to give her the ball with a 4-1 lead- they [Pride] just got the timely hit,.” stated Schumann.

The Racers and Pride will conclude the four-game series tomorrow at 2:05 at Firestone Stadium.