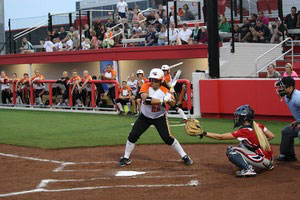 Rosemont, Ill. – The Bandits came out swinging in their third game of the home opening series against the USSSA Pride.

Nikki Nemitz and Cat Osterman would make their first start of the season at Rosemont Stadium.
Nemitz got through the top of the first giving up just one hit and surrendering no runs to the Pride. In the bottom of the inning, leadoff hitter Megan Wiggins stepped up to the plate and blasted her first career home run to give the Bandits an early 1-0 lead.

Both teams got through the second inning unscathed but the Pride started to find some offense in the top of the third. With the bases loaded Jenn Salling would go down swinging against Nemitz ending the frame.

In the bottom of the inning the Bandits’ got going with Amber Patton starting things off with an infield single, and Jamee Juarez walked to put two runners on as Alisa Goler came up to bat. Goler singled to right field, loading the bases for the Bandits.

Nikki Nemitz stepped up to the plate, and with an RBI groundout scoring Patton, gave the Bandits a 2-0 lead. Continuing the offensive inning, Rachel Folden doubled to centerfield scoring Juarez and Goler. Jager would come in to run for Folden and a Pride error allowed her to score giving the Bandits a 5-0 lead. That’s all the offensive they would need after a bunt attempt by Caitlin Lever ended the inning.

Next inning, a Natasha Watley single scored Megan Willis to give the Pride their first run of the game. A Bandits pitching change brought Monica Abbott out to the circle who finished the inning by striking out Jessica Mendoza.

Abbott wrapped up the rest of the game striking out four Pride batters to maintain the Bandits lead and give them their second win of the weekend.