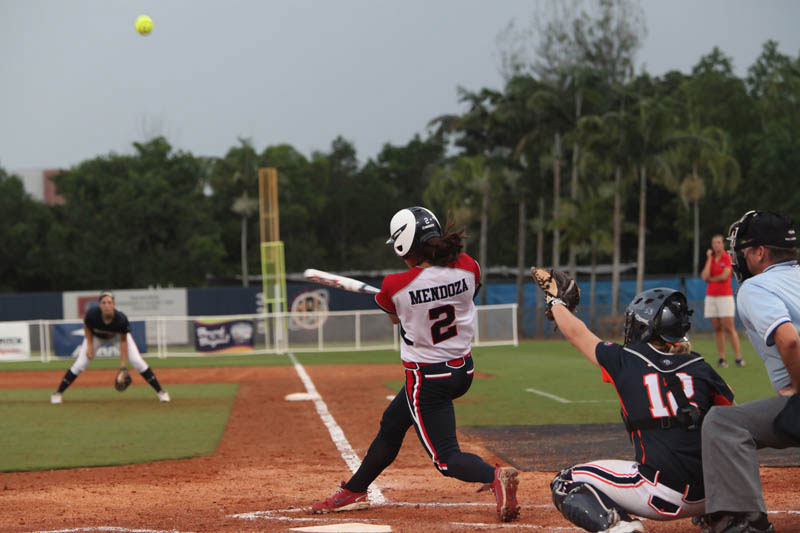 Rosemont, Ill. — A late rally by the USSSA Pride’s offense would lead them to a 5-4 victory over the Chicago Bandits Friday night.

The eventual game-winning run would come courtesy of the Pride’s Jessica Mendoza, who hit a ball toward the right side of the infield on a 2-2 count from Bandits pitcher Nikki Nemitz.

Things started of with the Pride making some history in Rosemont Stadium in the top of the second inning, specifically in the home run department.

In the the second inning, Pride catcher Melissa Roth launched a 1-0 pitch from Chicago Bandits starting pitcher Jamee Juarez right over the right-center field wall, just clipping the bottom of the scoreboard.  The former Louisville backstop’s homer was the first long ball hit by a Pride player this year, and the first regular season home run at Rosemont Stadium. Alexis Jager hit the first home run at the stadium in an exhibition contest against the Bloomington Lady Hearts on June 4.

n the bottom of the third inning, Bandits outfielder Caitlin Lever would start a productive inning with a leadoff walk off from Pride starting pitcher Sarah Pauly.

One batter later, Megan Wiggins would hustle her way for an infield single, and from there right fielder Amber Patton would drive her teammates home by sending a Pauly pitch up the middle to give the Bandits a 2-1 lead.

But that wouldn’t be all for the Bandits in the bottom of the third inning.

With Wiggins waiting patiently at second base, and right after a Rachel Folden walk, Alisa Goler would go shopping in the gap in right center, bringing home Wiggins and Folden to pad the Bandits lead to 4-1.

In the top of the sixth inning, with a 4-1 lead, the Pride would climb back into the game with a three-run inning to tie it all up at 4 a piece.

Mendoza would shoot a Juarez pitch out to the right field wall, and Pride first baseman Charlotte Morgan would score the runner with an RBI single to cut the deficit to 4-2.

Roth would follow up her second inning solo home run with an RBI single to right field, scoring Mendoza and inching the Pride closer, trailing 4-3.

Roth would eventually score after Folden had a throwing error to second base attempting to catch the runner, but Morgan would take advantage of the costly error to tie the game at 4-4.

After Mendoza’s clutch single, Pride reliever Cat Osterman would work her magic with two no-hit relief innings to seal the victory for the Pride.