Jenn Salling was named Defensive Player of the Year. 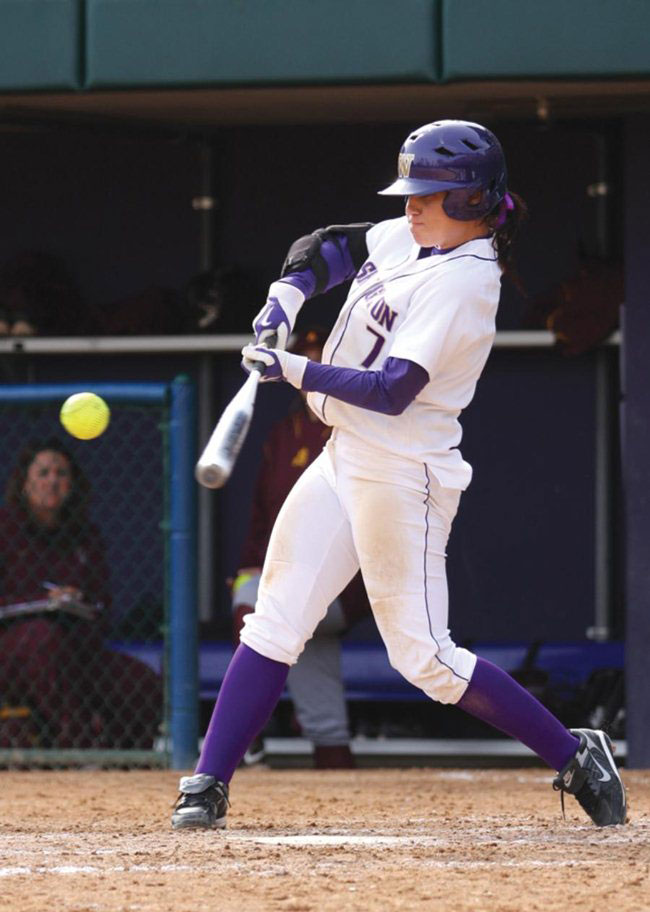 Senior shortstop Jenn Salling won her first Pac-10 Defensive Player of the Year honor and the first such honor ever given to a Husky. The Port Coquitlam, B.C., native ranks in the top-10 with 102 assists on the season. She has 88 putouts so far in 2011 and boasts a .969 fielding percentage. Her athleticism from the shortstop position helped her turn six double plays.

She is one of three Huskies to earn First-Team All-Pac-10 honors. Salling was also a first-team selection last year, a First-Team All-Pacific Region selection and a First-Team All-American. For the last two years she was a top 25 finalist for the National Player of the Year. She is also a top 10 finalist for the Lowe’s Senior Class Award. She is batting .373 on the year with a team-high 15 doubles and three triples. She is a member of the Canadian National Team and was recently drafted by the National Pro Fastpitch League and will play with the USSSA Pride this summer.

In 2010, Pohlman was on the pre-season top 50 USA Softball Player of the Year watch list. This year, she leads the team hitting .433 with 167 at bats, 52 runs, 74 hits and is 22-25 on the base paths. She also has seven doubles, 28 RBI, a 551 slugging percentage, 12 walks, a .489 on base percentage and has just made one fielding error in centerfielder for UW this season. She is started and played in all but one game due to an injury.

Williams was named National Player of the Week last year and the only Husky to earn Gohuskies.com Student-Athlete of the Week this year. This year she is hitting .372 and leads the team in home runs (13), RBI (50), walks (39) and on base percentage (514).

Freshman Kaitlin Inglesby (Portland, Ore.) earned Second-Team All-Pac-10 honors and was named to the All-Freshmen Team. She is second on the team hitting .398 with a team-best .767 slugging percentage. She also has 41 hits, five doubles, 11 home runs and 33 RBI. In the circle she has also led the team with a 22-8 record, 2.25 ERA, 16 complete games, three saves and 137 strikeouts in 183.2 innings pitched. She was the only Husky this year to earn Pac-10 Pitcher/Player of the Week honors.

Despite missing the last half of the season due to injuries, Smith still was honored by the Pac-10 for the first time. She was having an outstanding season before she got injured and was leading the team in hitting at the time. Her average is .444 in 27 games with 26 runs, 32 hits, six doubles, 10 home runs, 32 RBI and a .944 slugging percentage. She was a big part of a record-setting game for the Huskies against UC Riverside earlier this year. Smith hit three home runs in the game which tied a school record (Kristen Rivera, 2003) and tied for the second most in NCAA history. The Huskies had 23 hits, just one shy of the school record of 24 set at Nevada in 2005. Last year she earned Pac-10 Player of the Week honors, was named the Most Improved Husky, earned the coaches award and the Allison Mick Most Inspirational Player award.

Stuart is earning Honorable Mention for the third time (2008, 2009). She has been a solid third baseman for the Huskies all year long. She is hitting .276 on the season with 38 runs, 35 hits, seven home runs and 15 hit by pitch. Last weekend she tied Kim DePaul for the school record in hit by pitch with 45. In 2009 she was named the Pac-10 Player of the Week and to the WCWS All-Tournament team. She set a WCWS record with four doubles and tied a record by recording five hits in a single game. She also earned Pac-10 Player of the Week as a freshman and was named to the All-Freshmen team.

Joining Inglesby on the All-Freshmen team is Victoria Hayward. The Mountain View, Calif., native has played both infield and outfield for the Huskies this season. She has started in 38 games and played in all but two. She is batting .308 with 23 runs, 33 hits and has just three errors on the year.