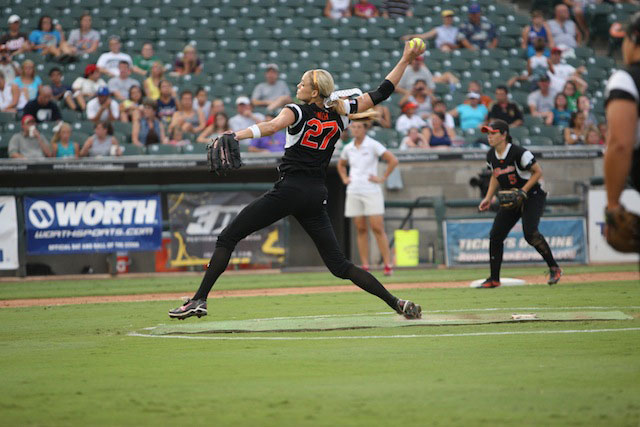 ROUND ROCK, Texas — Jennie Finch (5-2) and Danielle Lawrie stepped into the circle as the starting pitchers for the Chicago Bandits and Florida Pride Thursday evening, facing off in a pitchers duel that paired one of National Pro Fastpitch’s most notable player against a highly touted rookie from Canada.

The Florida Pride (22-17) went on to get the best of Finch and the Bandits (26-15) defense in the top of the fifth inning when a throwing error and hard single through the left side of the infield gave the USSSA Pride a 2-0 lead. Two runs would be enough support for Lawrie as she kept the potent Bandits lineup under wraps with a complete game, two-hit shut out.

With bases loaded and two outs in the top of the first, Pride third baseman Andrea Duran stepped up to face Jennie Finch. Finch, after hitting Tonya Callahan with a pitch, managed to get a pop up out of Duran to end the threat. Finch followed up the first with a quick 1-2-3 inning on only six pitches.

On the flip side of the diamond, Florida’s Danielle Lawrie (2-1) made quick work of Chicago in the first two innings, getting Samantha Findlay and Finch to strike out and Angela Findlay to slap an easy ground out to end the second inning.

With the lead-off trio of Natasha Watley, Kelly Kretschman and Jessica Mendoza stepping up to face her in the top of the third, Finch showed no fear, making quick work of the Pride with another 1-2-3 inning.

With Florida’s Lauren Lappin on first and no outs in the top of the fifth, Watley dropped a bunt, sending Lappin to second. Lappin hustled to third when she saw the base was uncovered, colliding with Chicago’s Christine Knauer while rounding third base to score a run on a players interference for a 1-0 lead.

Watley crossed home plate one batter later as Pride right fielder Kelly Kretschman slapped a single through the left side to put the score at 2-0 with zero outs on the board. Finch would escape the inning two batters later.

With zero’s across the board, USSSA’s Lawrie had the Bandits swinging at air with a perfect game – until the bottom of the fifth when Bandits right fielder Angela Findlay blasted a double to the centerfield fence, putting the first runner on the bases for Chicago.

Just one batter later, Chicago’s Vicky Galindo forced a mound meeting for the Pride when she drew a walk from Lawrie, putting two runners on for hot-hitting Bandits left fielder Emily Friedman. The scoring opportunity ended abruptly for Chicago however, as Friedman’s line drive to left field resulted in a double play to end the inning.

The Bandits could not recover from the defensive error and two runs, as the final three batters in the bottom of the seventh were sent back to the dugout, earning a complete game shut-out victory for Lawrie. The win is Lawrie’s second on the season and came with six strikeouts, two hits and two walks. For Finch, the loss marks just her second loss of the year. She gave up five hits, zero walks and struck out four in the 2-0 victory.

The Bandits and Pride face off again at the Dell Diamond in Round Rock, Texas tomorrow at 7:05 pm. Visit www.chicagobandits.com for information on how to watch the game live on your computer. Head to www.rrexpress.com to get tickets for the ballgame.

Rocking the Express: tonight’s attendance was 2,627 … Pride pitcher Danielle Lawrie had a perfect game going until the bottom of the fifth in just her third start in the NPF.