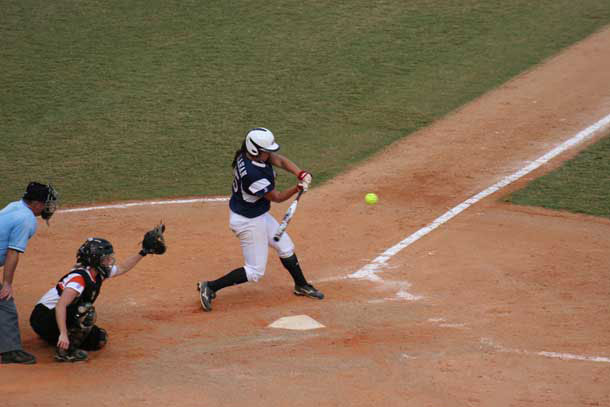 Kissimmee, Fla. – The USSSA Florida Pride took on the Chicago Bandits in a doubleheader today and allowed the Bandits to take away both victories as well as the series lead for the weekend.

Pauly started in the circle for the Pride in game one and shouldered the loss, allowing seven runs on seven hits, walking three and striking out four. Nikki Nemitz grabbed the win, after coming in in the first to relieve Kristina Thorson.

The Bandits struck first for the second night in a row on a two RBI double from Jennie Finch, driving in runs from Stacy May and Amber Patton. The side was retired on a ground-out to third from Angela Findlay but not before the visiting team took the early two run lead.

The Pride struck back in the bottom of the inning when Natasha Watley scored on a double from Kelly Kretschman after reaching on a single to lead off the inning. After a pop-out from Charlotte Morgan, Tonya Callahan pushed Kretschman across the plate in an RBI single, advancing to second herself on the throw. Andrea Duran followed with a similar play, allowing Callahan to score. A bunt from Alissa Haber looked poised to score the Pride’s fourth run from Duran but she was thrown out on the attempt, ending the inning.

The Bandits tied the score in the top of the fourth when Caitlin Lever, pinch running for Angela Findlay made it across the plate on a throw from catcher Lauren Lappin to second, then took a one-run lead in the top of the sixth on a solo home-run from Samantha Findlay. Three quick outs followed to retire the side.

The Bandits tacked on three more runs in the top of the seventh on a two RBI single from Amber Patton, driving in Emily Friedman, who had reached on a single, and Christine Knauer. A single from Samantha Findlay followed and pushed Patton across the plate.

The contest ended in a 7-3 Bandits victory and was immediately followed by an on-field ceremony honoring the career of Jennie Finch and her imminent retirement.

It was Finch who started things off for the Bandits in game two with an RBI single in the top of the first inning, scoring Rachel Folden, who had reached on a fielder’s choice. Finch was followed by Angela Findlay whose RBI double pushed Samantha Findlay across the plate. A walk from Vicky Galindo was followed by a single from Emily Friedman, driving in two more runs from Finch and Angela Findlay, giving Chicago the second early lead of the evening.

Kelly Kretschman answered back in the bottom of the first with a two run homerun, scoring Natasha Watley, who had reached on a single, and herself, closing the deficit to two at the close of the first.

Stacy May opened the second inning with a solo homerun, growing the Bandits lead yet again. She was followed by three additional base hits, from Amber Patton, Rachel Folden, and Angela Findlay, who struck with a two RBI double, pushing Patton and Folden across the plate.

Haber led off the bottom of the second for the Pride with a single and the Pride marked two more hits across the inning with a single from Natasha Watley and an RBI double from Jessica Mendoza, driving home Haber. Kretschman followed at the plate and grounded out to second but allowed Watley to cross the plate, scoring the Pride’s second run of the inning. The Pride continued their fight for a come-back in the bottom of the third when Andrea Duran scored on an RBI single from Alissa Haber, though Haber was thrown out on an extra base attempt, ending the third.

The Pride attempted a rally in the bottom of the fifth, loading the bases and looking to secure a come-from-behind lead. They were unsuccessful however, and a fly-out to left from Alissa Haber left the maximum three runners stranded at the close of the inning.

The score held for the remainder of the contest, giving the Bandits both the double-header and the series in a 7-5 victory.

Desiree Serrano took the loss for the Pride, allowing five runs in only one inning of work. She was relieved by Katie Burkhart who, over six innings of work allowed two runs on five hits. Opposite in the circle was Eileen Canney who took the win for the Bandits.