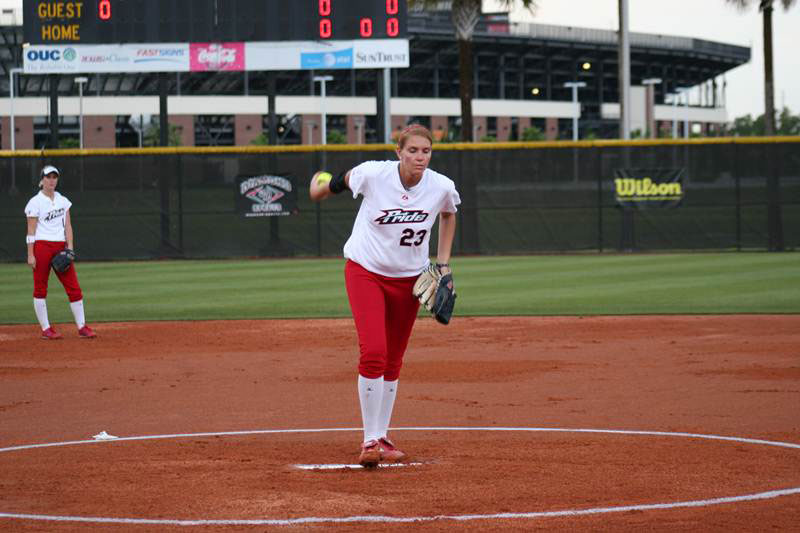 AKRON, Ohio (July 16, 2010) – The USSSA Pride staked an early 3-0 lead but the Akron bats lit up for seven runs in the third as the Racers rolled past the Pride, 9-4 in game three at Firestone Stadium.

In handing the USSSA Pride (14-11) its second-straight loss this series, the Racers (14-10) move into second place behind the Chicago Bandits.

Akron managed 10 hits in the game as four Racers, including Lisa Modglin, Jackie Pasquerella, Sharonda McDonald and Juarez each finished with two base knocks apiece while Samantha Ricketts and Juarez each tallied two RBI.

The Pride took control of the driver’s seat early, jumping out to a 3-0 lead in the second and third frames. Charlotte Morgan drove in Kelly Kretschman who led off with a single in the second before Jessica Mendoza’s two-run homer to right gave the Pride a 3-0 cushion after two and a half innings.

The complexion of the game drastically changed in the home half of the third as Akron pounded out seven hits and took advantage of three costly Pride errors to move ahead, 7-3. Pasquerella and McDonald got the Racers started with back-to-back singles before a Serrano throwing error enabled both to move into scoring position. Modglin then drove a RBI single to center before a fielding error on Andrea Duran allowed Jess Valis to reach first while McDonald crossed home plate, making it a 3-2 affair. The third error of the inning—a misplayed ball by Lauren Lappin saw Micaela Minner reach first while Modglin scored, tying the game at 3-all and chased Serrano from the game as Pauly entered in relief. Playing it safe, the Pride intentionally walked Crystl Bustos to little effect, setting the table for Kelley Montalvo who drew the RBI walk. Juarez then helped her own cause with a two-RBI single to center which Pasquerella followed up with a RBI single to center, putting Akron in front 7-3.

A scoreless fourth inning gave way to a two-run fifth as Ricketts put Akron back on the scoreboard on her fourth homer of the year with a deep shot to right field. The blast also scored pinch runner Trena Peel, running in place of Bustos who led off with a single to center to put Akron in front, 9-4.

Atop the sixth, Kretschman lofted a solo shot to left to make it a 9-4 game but Juarez shut the door soon thereafter, holding the Pride scoreless over the final inning and two thirds.

Game four at Firestone Stadium will take place tomorrow (Saturday, July 17) at 7:05 pm as the Racers celebrate a noble cause in pediatric cancer research with Kick-It For Kids Night (and appreciate sponsor Chick-Fil-A Night). For more information or tickets, please visit www.akronracers.org. To follow the series from home, you can catch the action live on MLB.com with a $19.95 season-long subscription or view live stats via www.pointstreak.com.