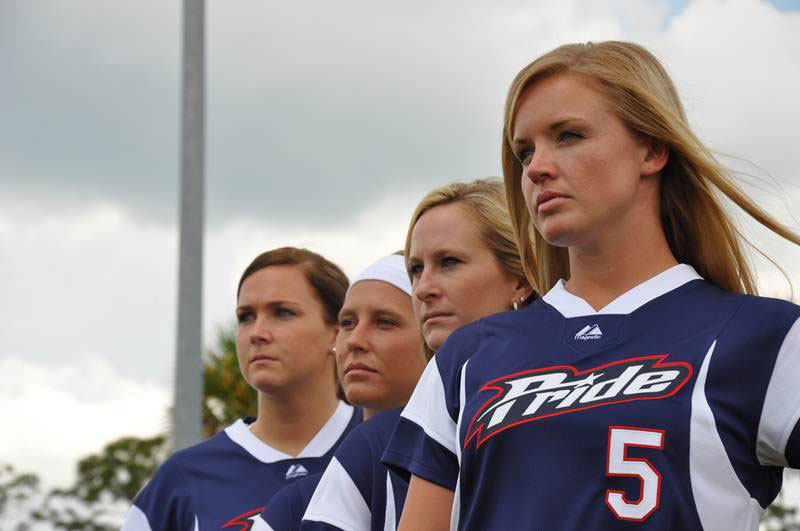 Orlando, Fla. – The USSSA Florida Pride and the Chicago Bandits took to the field today in the fourth game of the West Texas Duel on the Diamond. A nationally televised contest, aired on ESPN2, featured two of the world’s most prolific fastpitch pitchers, Cat Osterman and Jennie Finch, going head to head in what the NPF was touting as the “Battle of the Best,” a competition only possible within the league.

Starting in the circle for the Pride was Osterman, a former Olympic gold medalist who, in the pre-season, threw a fourteen strike-out game against the Venezuelan National Team. Her complete game effort saw Osterman throwing nine strike-outs, allowing three runs off of five hits and walking none.

The Pride threatened early and was the first to score in the bottom of the second. Four consecutive walks from Finch allowed Lauren Lappin, Andrea Duran, Charlotte Morgan, and Megan Willis to make it on base, driving in the run for Lappin. A strike-out from Natasha Watley followed, leaving the three remaining base-runners stranded at the close of the inning.

The home team secured themselves a four run lead in the bottom of the third after three consecutive hits to open the inning off of relief pitcher Kristina Thorson. A single from Caitlin Lowe was followed by a double from Jessica Mendoza, leaving the Pride with multiple scoring opportunities when Kelly Kretschman stepped to the plate. Her second home run of the series brought in both Lowe and Mendoza and added another three runs to the Pride’s score. Three quick outs followed to end the inning.

The Bandits began their attempt at a comeback in the top of the fourth. A double from Stacy May was followed by an RBI single from center fielder Vicky Galindo. Three outs followed to end the fourth, but the Bandits continued their run for a lead in the top of the fifth. A double from Emily Friedman was followed by a dropped third strike on Ashley Holcombe’s at-bat, allowing Friedman to advance to third. May came to the plate next, and a pass ball allowed Holcombe to advance to second, leaving the Bandits with multiple scoring opportunities. A two RBI double from May, her second double of the game, drove in Friedman and Nicole Pauly, pinch running for Holcombe, closing the Pride lead to one.

The Bandits threatened again in the top of the seventh when Angela Findlay made it on base off of an error from shortstop Natasha Watley and was followed by a single from Rachel Mitchell, putting her in scoring position on second. A ground-out from Emily Friedman advanced both runners, but they were left stranded at the close of the inning after two outs from Holcombe and May.

The USSSA Florida Pride take on the Chicago Bandits for the fifth and final game of the West Texas Duel on the Diamond tomorrow at 12:05 EST. With the series now tied at 2-2, this will be the determining game in deciding the series.