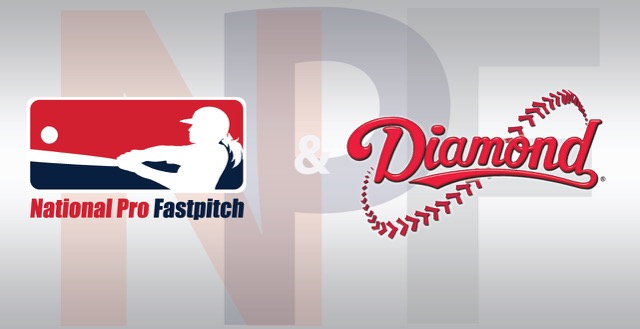 NASHVILLE, Tenn.-December 19, 2017 – National Pro Fastpitch has reached an agreement between the league and Diamond Sports, that extends Diamond as the Official Ball of the NPF through the 2020 season.

“We are very pleased as a league to announce the continuation of our long relationship with Diamond as our Official Ball,” said NPF Commissioner, Cheri Kempf. “Our Official Ball is an extremely important category because it directly affects performance. Diamond, year in and year out, has provided a high quality, consistent, and dependable product to the NPF for league and Championship competition. We appreciate their pride in performance and their commitment and dedication to the NPF, our teams, and players.”

“Given the continued success and growth for the NPF, we couldn’t be more excited to continue our long partnership with the global leader in Fastpitch softball, and a pioneer in women’s professional sports,” said Andrea Gordon, President of Diamond Sports. “The league and the players’ commitment to excellence on and off the field goes hand in hand with our corporate values and dedication to the sport. We’re thrilled to be in the circle for every NPF game for the next three seasons!”

National Pro Fastpitch (NPF), an Official Development Partner of Major League Baseball since 2004, provides elite female athletes with an opportunity to pursue a professional career in fastpitch softball beyond their collegiate and amateur success. National Pro Fastpitch players hail from the United States, Australia, Canada, Netherlands and China among which are the most accomplished and talented athletes in the sport of women’s softball.

Diamond Sports designs and manufactures high quality softball and baseball products for all levels, while striving to inspire participation in softball and baseball with character, integrity, and respect to the game. Diamond Sports is based in Southern California and is proud to be the Official Ball of many great leagues, tournaments, and organizations nationwide. You can find Diamond online at diamond-sports.com.