Pride Open at Home Against Rebellion 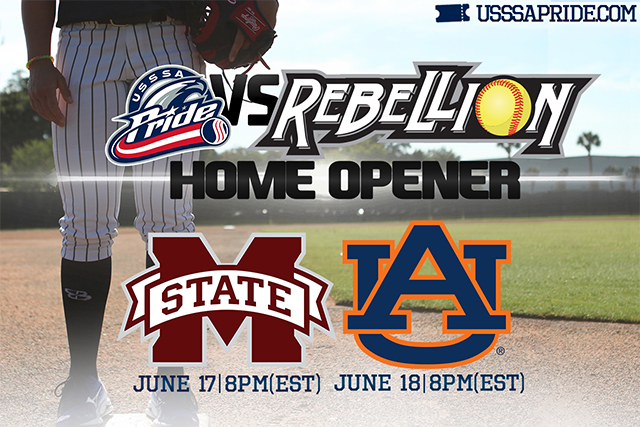 Kissimmee, FL—June 16, 2016—The USSSA Pride are heading to Starkville for their 2016 home opener against the PA Rebellion. The series kicks-off Friday night with game one at Nusz Park, home of Mississippi State softball. Game two will be hosted at Jane B. Moore Field in Auburn, Alabama Saturday evening.

Coming off two series wins, the Pride have improved to an overall record of 5-1 and will be facing the PA Rebellion for the first time this season.

First pitch for both games is set for 8:00PM (ET) and can be followed live on NPFTV.

The Rebellion have gotten off to a rocky start to begin the season. They are 5-8 coming into their series against the Pride and are looking to take a couple of wins back to Pennsylvania. With eight players hitting above .300, it seems that timely hits are the solution to the Rebellion’s problem. They’ll look to pose a threat to the Pride defense this weekend.

Subscribers can view both games of the series on NPFTV via profastpitch.com. Fans can also watch the match-up on MLB.com, TUFF TV, Comcast Sports Network Plus+, Cox Sports TV and American Sports Network.

Live stats links for this weekend’s games can be found on the NPF schedule page.